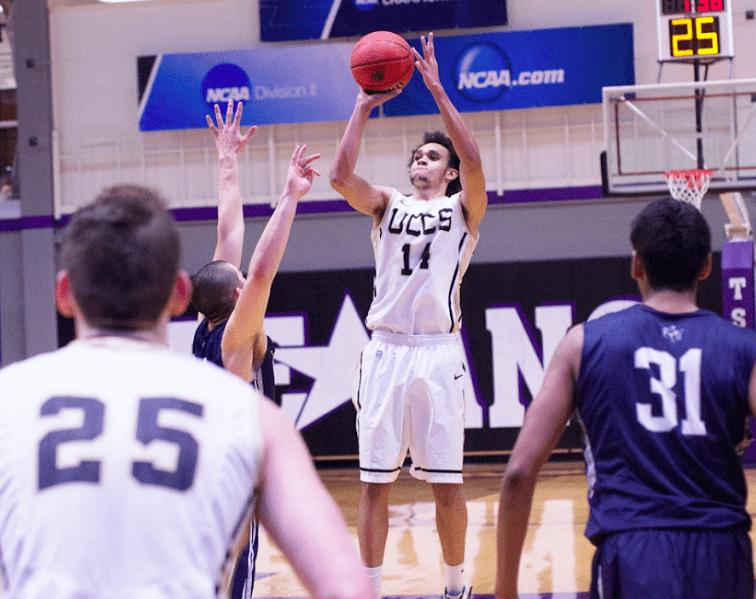 UCCS alumni, White starts for the Spurs’ in run to the NBA Playoffs

As the Denver Nuggets continue to battle the San Antonio Spurs in the first round of the NBA Playoffs, some might notice a familiar face playing point guard for the Spurs: former Mountain Lion, Derrick White.

White spent three seasons at UCCS before transferring to CU Boulder after sitting out for a year due to transfer rules.

UCCS was the only school to offer White an athletic scholarship, a story that has become widespread since White’s emergence this season.

“I was at my last spot — Johnson and Wales — when I started recruiting him,” said men’s basketball head coach, Jeff Culver. “When I got this job, he was my first recruit on campus for a visit. We offered him a partial scholarship and brought him on.”

The summer following White’s senior year, he was drafted by the Spurs with the No. 29 overall pick in the 2017 NBA Draft. After playing in only 17 games last season as a rookie — White spent most of last season in the G-League with the Austin Spurs, averaging 20.1 points, 5.0 rebounds and 3.3 assists per game on forty-five percent shooting — an opportunity opened up for White to be the starting point guard after teammate, Dejounte Murray, tore his ACL prior to this season.

White averaged 9.9 points per game and 3.9 assists while shooting 48 percent from the field in his first season as a starter. But White has taken his game to another level in the first round against the Nuggets.

Currently averaging 15.7 points per game on 55 percent shooting, White has been a big part of the reason why the No. 7 seed Spurs are keeping even with the No. 2 seed Nuggets. With Murray expected to make a full recovery ahead of next season, White will be part of a promising Spurs backcourt.

“[We] were planning on redshirting him but ended up playing him and every year he got a little bit better at something.”

White was named to the All-RMAC Third Team during the 2012-13 season, his freshman year. White was also named to the Division II Bulletin All-Freshman Team and was the RMAC Freshman of the Year. With 440 points that year, White also broke the UCCS single-season record for freshmen.

White was named to the All-RMAC First Team his sophomore year, averaging 25.8 points per game, 4.2 assists per game and 6.2 rebounds per game. He also became the first player in program history to earn All-America honors from the National Association of Basketball Coaches

At the end of the 2014-15 season, White also helped lead the Mountain Lions to their first RMAC Championship win in program history, an 82-65 win over MSU Denver, with 37 points and 10 rebounds.

“From day one we knew he was special,” said Culver. “He was just doing some things in practice that were next level. Every offseason he gained a new skill, gained a new tool in the toolbox and I think that there were times in his sophomore year where he was showing signs that he was an elite level and he had the potential.”

“When NBA teams start calling, you realize he’s got a chance for that. When he gained some weight and some muscle heading into his third year, that’s when he started to look the part a little bit more.”

Following his junior year, White made the decision to transfer to CU Boulder, where he would be able to play Division I basketball.

Culver was able to elaborate on what that conversation was like: “He certainly felt loyal to our program and he put in a lot of work. [He] made a lot of great relationships with our staff and with his teammates so this was a tough decision for him to want to transfer and you could tell that it was difficult for him to talk about it. But he ultimately felt it was the right decision for his professional development to get on a bigger stage and so we respected that, got him his full release and supported him as much as we could.”

“That first year was kind of rough,” Culver continued. “We put together a schedule thinking that we had Derrick coming back and thought that we would be in the running for a national tournament, so the schedule was a little bit rough then without him especially early on.

“We had other guys step up like Alex Welsh who was flying under the radar since Derrick was taking most of the limelight and Welsh was always a complementary piece to Derrick. But Welsh is a very capable basketball player, he’s our all-time leading scorer and rebounder in school history so he had some game himself, so he was able to elevate and make up for some of that that we missed with Derrick.”

“We talked to our guys about how we weren’t going to go get another ‘Derrick White’ to replace him and we expected other guys to step up and I thought that they did.”

In his one season at CU Boulder, White averaged 18.1 points per game and was top-10 in the Pac-12 in scoring, assists and blocked shots. White concluded his college career by scoring 25+ points in both of CU Boulder’s Pac-12 tournament games. The following summer, the Spurs drafted White with the No. 29 overall pick in the 2017 NBA Draft.

“That first year that Derrick left that would have been his senior year, there was certainly some adjustment. But the program was able to bounce back and continue to win and get into the playoffs, so we’ve been pleased with that. But [Derrick’s] time here was certainly memorable.”

“Derrick was a significant piece in lifting our program to the national level. Putting UCCS on the map not only within the conference in respect to the RMAC institutions but having people in the region and in the nation take notice and are now familiar with UCCS because of that and he’s a big reason for that.”

“There’s certainly a lot of other people that played into that as well, the success in the program and what we’ve done in the last six years, but Derrick has really been at the forefront of what put UCCS on the map.”

At press time last Thursday, the Spurs had just defeated the Nuggets in game six of round one of the NBA Playoffs, with White having scored 13 points in the game before being replaced by No. 22, Rudy Gay, with just over five minutes left to play. The series is now tied 3-3.