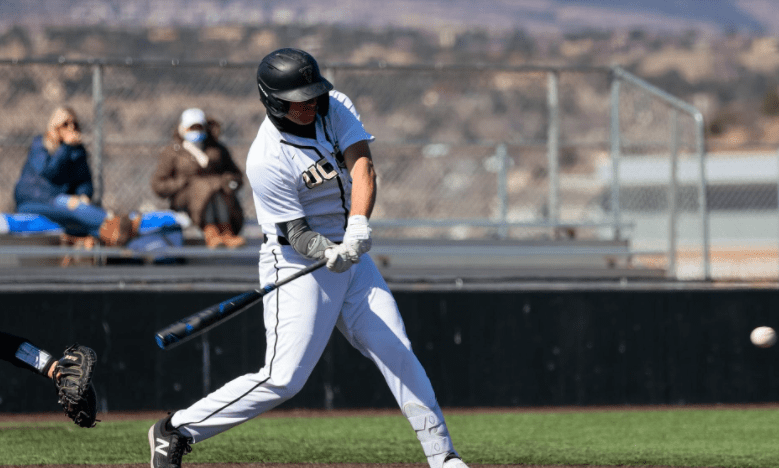 By: Zach Robbins
In: Sports & Recreation

The UCCS Baseball team dropped its first three games in their series with Colorado Mesa University last weekend, before pulling out a victory on Sunday, bringing their record to 8-4.

UCCS entered Friday’s afternoon game against Colorado Mesa University (CMU) with a 7-1 record to open the season before facing the No. 5 ranked Mavericks.

UCCS took a 4-1 lead in the fourth inning of their first game. A 2-run single by redshirt junior outfielder Aaron Faragallah got the Mountain Lions on the board first. They followed with a run in the third inning and another in the fourth.

Daniel Silva, the starting pitcher for UCCS, held CMU in the opening frames, but the redshirt senior allowed four runs in the fifth and sixth innings. The Mountain Lions were never able to regain their previous lead and lost 7-4.

The pitching starter for CMU, Andrew Morris, pitched a complete game to help his team with the win.

Game two of the weekend-long series began at noon on Saturday with Colorado Mesa putting up all seven of their runs in the first three innings. The Mountain Lions competed by putting runs on the board throughout the game. Despite a pair of home runs from Faragallah and redshirt sophomore infielder Kiichi Sato, the Mountain Lions came up one run short, losing 7-6 in a seven-inning contest.

The bats were alive in the second game of the Saturday doubleheader with UCCS hitting three homeruns in the second inning. Sato began with a 2-run home run, followed by a 3-run blast from shortstop Matt McDermott. First baseman, Jake Anderson, a redshirt senior, hit a solo homerun to go back-to-back with McDermott, which propelled the Mountain Lions to an early 6-run lead.

Colorado Mesa batted around with nine runs in the fourth inning, but UCCS was able to respond with six more in the fifth. Another strong offensive effort by the Mavericks in the top of the sixth was followed by a 2-run homerun from UCCS designated hitter Dylan Morace, a redshirt sophomore, which tied the game at 14 going into the seventh and final frame.

The UCCS offense stalled after giving up a solo homerun to the Mavericks in the top of the seventh and dropped game three of the series with the end score of 15-14. A combined total of nine home runs were hit by both teams.

The final game of the series took place on Sunday morning, in another close game that resulted in a UCCS win.

After two runners reached base to open the bottom of the 11th for the Mountain Lions, the next two batters failed to bring them around. Jaeden Hegmann, the redshirt junior playing third base, brought the winning run around with an RBI single to win the game. JJ Rytz, a redshirt sophomore, was credited with his first win of the season.

UCCS will host Colorado School of Mines and New Mexico Highlands University next weekend, starting on Friday, March 26 at 11 a.m.