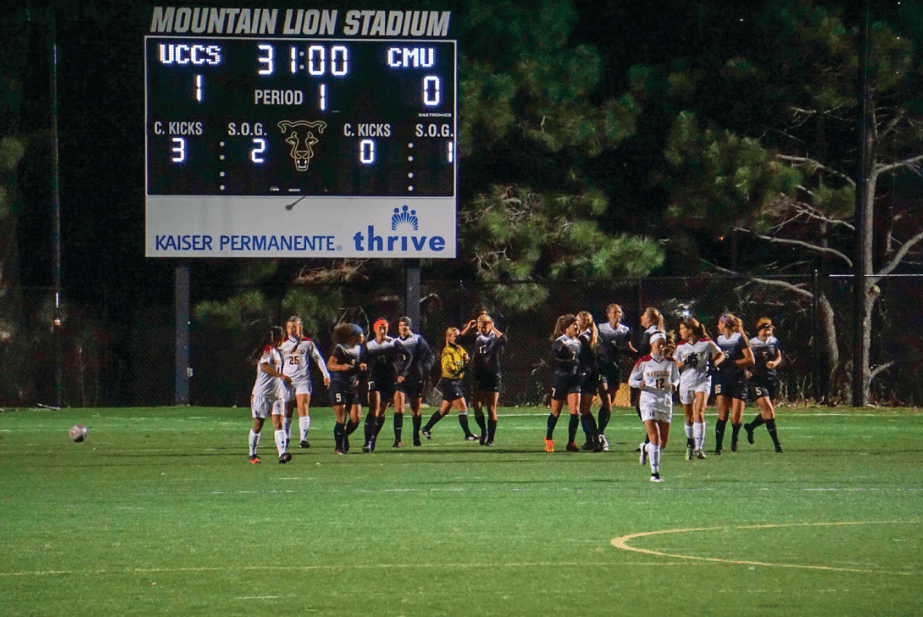 This season, the women’s soccer team is changing their approach as they look at heading to the NCAA Division II tournament on Nov. 10.

“The way we play is different. If you watched a game last year and watched a game today, you would be like whoa, that’s not even the team; they aren’t even doing the same things,” said senior forward Bailee Jameson.

The team competed in the RMAC Tournament against Colorado Mesa on Oct. 31, winning 4-0.

On Oct. 31, two members of the team earned individual honors earning spots on the All RMAC First Team, three others were named to All RMAC First or Second team and one earned Honorable Mention. Senior Taylor Proctor earned Goalkeeper of the Year honors, and Tarah Patterson was named freshman of the year.

The game was the first time that this new approach was used and since then, it has helped the team compete against teams who were nationally ranked or have been to the national tournament, said Jameson.

“We are definitely working more offensively. In practice, we have been working on offensive runs, just making plays creative so we can be dangerous because that’s how we are going to win games,” Jameson said.

“Some of the teams in RMAC we can kind of relax against them. However, against teams like Regis, Mines and Metro, we need to be more effective in everything we do.”

“This strategy is more prevalent now. In the beginning, it was just kind of like let’s win some, but now it’s really hitting home. We need to pretty much win every game from here on out,” said Jameson.

Since last year, a few changes have been made to the team. In January, Sian Hudson was named head coach and in February, 12 athletes signed to play at UCCS.

“Compared to last year, we have an entirely new team. We only had seven or eight returners from last year so the whole team is new, but I would say it’s a great difference,” said Jameson.

After Oct. 31, the team entered the postseason as the No. 3 seed in RMAC with an overall record of 12-4 and a conference record of 10-2. They finished the regular season with a 2-1 victory against CSU-Pueblo in 2 overtimes.

On Nov. 3 during the second round of the tournament, they played Colorado School of Mines in Denver.

Last year, the women’s soccer team had a record of 3-12-1 and missed out on the playoffs. This year, they are planning on going to the National Tournament for the first time.

“We’ve never been to the national tournament. I know that the best team in every conference will make it to the tournament, so I don’t know how far we will get,” said Jameson.