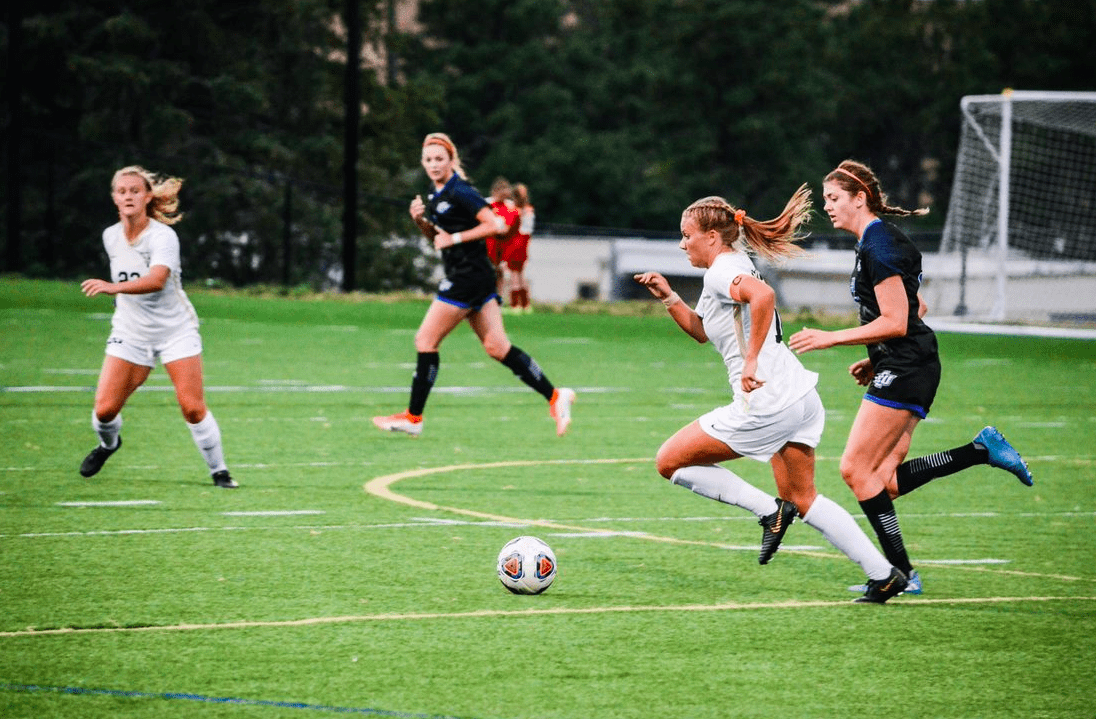 By: Carson Frost
In: Sports & Recreation

With only a minute and change off the clock on Sept. 5, sophomore forward Savannah Mills scored the team’s first goal of the season. She later followed up with another score 46 minutes in, carrying UCCS to a 3-1 win in front of the home fans.

The next matchup came against West Texas A&M, the No. 10 ranked team in Division II women’s soccer and the group that knocked the Mountain Lions out of the NCAA tournament last year. UCCS was on the board after only one minute with a goal from freshman forward Tanner Sanders.

UCCS took twice as many shots as West Texas, and Sanders followed the lead of Mills, becoming the second Mountain Lions player in two games to score twice. By the end of it, UCCS pulled off the shutout with a 3-0 win.

This success follows the Mountain Lions’ must successful season in program history, where then went 16-3-3, finishing as runners-up in both the Rocky Mountain Athletic Conference (RMAC) and the NCAA championship tournaments — all three years after a 3-win 2016 season.

In her third year of coaching at UCCS, Coach Sian Hudson has continually put her teams in the national spotlight. Last year, the team broke school records in multiple offensive categories: points (163), goals (62), goals per game (2.82), shots (420) and shots on goal (209), according to an online statement by the UCCS athletic department.

With two consecutive tournament appearances, one RMAC Championship win, two All-American players, and a record season for wins in UCCS history under her belt, Hudson now has the opportunity to coach the underclassmen she recruited. This year, the team features a roster of 32 athletes, 12 of which are incoming freshman.

“It starts with recruiting athletes that fit your philosophy,” said Hudson. “Not from just from a talent perspective, but also from a cultural perspective.”

In women’s soccer, athletes are typically recruited two years prior to their arrival to the team, meaning that Hudson was able to get involved early and sign the freshman standouts, with Sanders, forward Nicolette Sandoval and goalkeeper Mollee Swift among 12.

Hudson said that she understood the unique ability this class would bring to the table.

“We always knew that this was going to be a special freshman class,” said Hudson. “As a freshman class I’m excited to see what they can do during their four years here.”

What can always be expected by a Hudson-run team is a relentless offensive attack and a tenacious defense to prevent shots on goal.

The Mountain Lions are set for a quick trip to California, a weekend in Grand Junction, and a heavy schedule against fellow RMAC schools.

According to Hudson the team is has a strong sense of unity right now and she believes the team will have a strong season.

“We’re really excited about this group, it’s been a good start to this season, and we hope to build a lead this weekend,” said Hudson.

2019-09-17
Previous Post: Almasri balances college, cross-country and clubs in a city that is close to her heart
Next Post: Student survey gathers data for ‘Meatless Mondays,’ no current plans