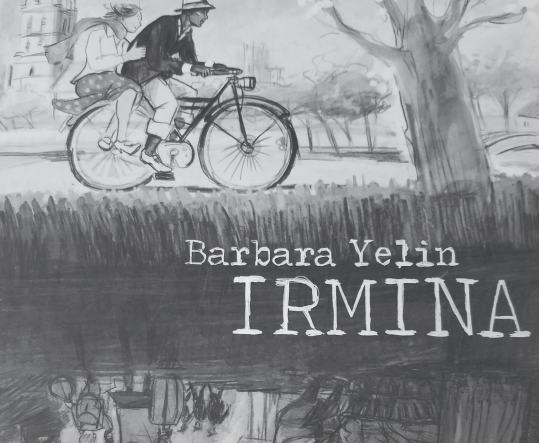 I’ve spent many early mornings perusing the campus library before class; the library’s collection and quiet atmosphere give me an escape during the more stressful parts of each semester.

I have walked by the shelves of graphic novels on more than one occasion, and one or two of them have caught my eye.

Even though I usually don’t like to judge books by their covers, I was especially intrigued by Barbara Yelin’s graphic novel, “Irmina.”

The story follows the travels and life of Irmina von Behdinger, a smart and curious woman from Germany. The story begins with her move to 1934 London to work and attend school.

“Irmina,” published in 2015, is based off of Yelin’s grandmother’s letters and diaries. The graphic novel digs into the history of preWorld War II, along with a personal glimpse into the author’s ancestry, which was captivating.

Behdinger is encouraged to question the status quo and fight when she feels that someone she loves is being treated with injustice in ways that echo problems in today’s society.

An enjoyable aspect of the novel was the chance to glimpse into history through the eyes of someone who experienced it. The illustrations exhibited movement along with sound, perspective and color.

I was surprised by how the main character changed from the beginning of the story to the middle and at its conclusion.

The reader immediately sees Behdinger’s growth, giving them the opportunity to see how people can influence one another. I realized that I might be a completely unrecognizable version of myself to those who may have known me just years ago.

One aspect that I had to get used to was seeing the story depicted in clips and dialogue.

As a reader, I felt like I was in the atmosphere that Yelin created in her work: the clicking of a typewriter; the buzzing of automobile traffic and honking horns in the busy roads of London; the clanking glasses of cocktails or whiskey sipped by Behdinger and her friends at parties.

The artwork gave life to the characters, and I enjoyed the process of getting to know each of them through this medium. Each relationship illustrated by the author was believable and touching.

The reader gets to be a part of a gentle friendship that unfolds between Behdinger and Howard Green, one of the first black students to attend the University of Oxford. Their relationship grows as they spend time together, becoming acquainted with each other while Behdinger gets used to her new surroundings.

I was held by the plot, which takes the reader in an unexpected direction because of Irmina’s return to Germany. Tension was built within the historical world and within me as a reader, and I had questions about what would happen in the pages to come.

From there, I was continually surprised by each change within the plot and how it truly affected the main character as a human being. She transformed with each monumental change in her life.

The climax of the story was unexpected and bittersweet. The novel honestly illustrates life and how a person’s circumstances can change them.

I have never read a graphic novel before this one, and I am really glad that I gave this one a try. This novel is one that teaches the reader something of history while still holds relevance today.

The book reads quickly and with ease and is a great choice both for lovers of history and for those who crave a powerful and thought-provoking story.