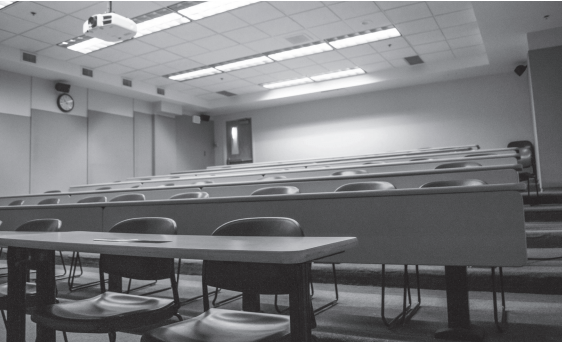 At UCCS, there has only been one severe cheating case in the last five years with the current policy, said David Moon, senior associate vice chancellor for Undergraduate Education and Academic Planning.

The UCCS Student Code of Conduct states that students may face discipline if they engage in “any form of academic misconduct, including plagiarism, fabrication, falsification and other forms of cheating on examinations, tests, quizzes, research projects and assignments.”

If a student is accused of academic dishonesty, their instructor is responsible for deciding the severity of the case. It is the instructor or professor’s decision whether to bring it to the attention of the college, said Moon.

“The faculty member has the first responsibility for sorting all of it out up to the level of failing the course,” said Moon.

“It is possible to escalate it to the college, in which case, the college can put the student on academic probation, academic suspension or even expel them,” said Moon. “Most of the time it stops at the course level.”

According to the Academic Honor Code, cheating offenses are kept on students’ educational records.

If a professor decides to fail a student for cheating, the student can retake the course and still meet the course requirements. But the failed course will still be reflected in the student’s GPA, according to Moon.

Individual colleges at UCCS post their policies about academic dishonesty on the UCCS website. For example, the Department of History states that Honor Code violations can result in reduced grades, disciplinary probation, immediate suspension and permanent expulsion, among other consequences.

“I try to provide every avenue for them to have access to what they need to know, and I try to make it as digestible as possible for them,” senior physics instructor Robert Gist said in an email.

“In the end, I don’t think I take it personally, I just realize that they have chosen a risky and ineffectual strategy for getting through school that will not pay off in the long run.”

UCCS uses SafeAssign, a tool exclusive to Blackboard, to prevent cheating on assignments submitted online and to teach students how to avoid unintentional plagiarism.

When a student submits an assignment to Blackboard, they are required to agree to send it through SafeAssign to check for plagiarism.

“It looks through a fairly large stock of other materials on the internet and compares how much of the document is the same,” said Moon.

According to Moon, SafeAssign does the first step of highlighting areas of similarity between the student work and other documents. It is then up to the professor to look through the highlighted areas and determine what percentage of it is direct quotes, restating and other legitimate forms of copying.

“You don’t want to be, and we don’t want you to be, in the position of claiming things that aren’t really yours,” said Moon.

According to Moon it is important to understand the seriousness of cheating.

“The penalty needs to be harsh enough to make sure students take it seriously, but at the end of the day, what we really want is for them to learn why this is a problem,” he said.

Not only does it feel personal to a professor when one of their students cheat, but it is also unfair to other students in the class, according to Moon.

“Whatever the grade distribution is, to have that impacted by someone who is breaking the rules is really unfair to the other students,” he said.

2017-04-10
Previous Post: Sushi burrito tasty, too overwhelming in portion size
Next Post: ‘Beauty and the Beast’ remarkable until the last petal falls