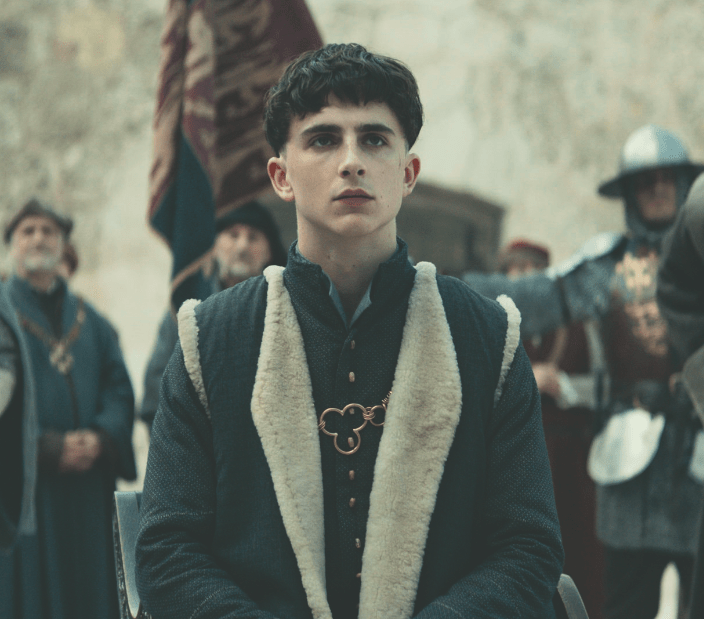 A cinematic masterpiece: ‘The King’

Intrigue. War. Backstabbing. Timothée Chalamet. Three elements that “The King” does right. David Michôd does fictional history justice with this absolutely stunning adaptation of Shakespeare’s works around King Henry V of England and his victory over France in the 15th century.

Hal (Chalamet), also known by his official title as Henry Prince of Wales, is the apathetic son of the king of England. A title so dreamy, yet Hal seems to want nothing to do with it, instead choosing to drink with his friends. Summoned to the court, he is informed that his father is ill and wishes for the title to be passed down to Hal’s younger brother, who later dies in battle, thus passing on the title to Hal, then becoming Henry V.

Hal is immediately sent a gift by the Dauphin of France (the successor to the French throne), a gift which is just slightly threatening, and which leads to the English invading France, ending in the Battle of Agincourt. The rest is history.

If you have seen “Game of Thrones,” this is probably familiar business to you.

In a post- “GOT” world, this is what fans of the fantasy show need. Only there are not dragons or magic; instead, we get flowery dialogue and dated words and expressions. But the feeling of watching a medieval drama is there. We even get a scene that almost exactly replicates the Battle of the Bastards from “Game of Thrones.” Gruesome at best, otherwise, it feels more like a slow episode of “GOT” with little action.

For the entirety of the movie, you get the impression you are looking at a painting of the historical events. Yes, which at times may be boring. Even still, the beauty of how the characters are dressed, how they talk and how the sets reflect the most sophisticated and at times barbaric lifestyle of 15th century Western Europeans all work together to form an admirable work of art.

Sometimes it is laughable. Robert Pattinson (“Twilight”), who plays the Dauphin, speaks with perfect English masked by a thick (and horribly fake) French accent. Put French American Chalamet and Englishman Pattinson in a scene together, and boy does comedy ensue. At least for the audience.

And, of course, Chalamet is much too charming with his perfect use of both French and English. That man deserves every award.

Bad accents aside, this is a difficult film to get into. But it is easy to tell that the film is aware of that, and that it is not the purpose of the film. The purpose is to tell an important part of English and French history. Just like Shakespeare’s interpretations, which influenced this movie, sometimes we as an audience are meant to enjoy the beauty of the work rather than strive to get that delicious fix of entertainment for the evening.

“The King” does not fit with Netflix’s typical binge-worthy, top-40-like shows or movies. It is an attempt at high culture, a successful attempt at that. In its own right, it is a perfect film, one that deserves a place at the next awards ceremony.