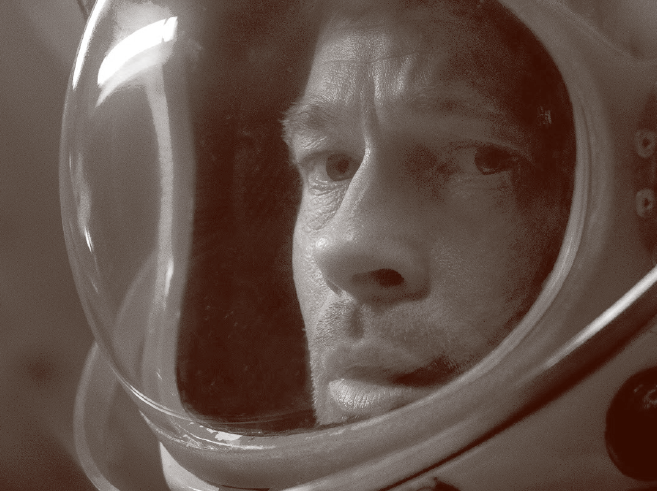 “Ad Astra” reaches the stars, but leaves some bits behind

Just another space movie, or a groundbreaking take on futurism? Or… neither. Slightly unknown director Josh Gray’s take on extraterrestrial exploration and an Earth approaching dystopia slams down an unexpectedly powerful hammer in “Ad Astra,” making for a remarkable work of cinematic art.

At its core, “Ad Astra” – Latin for “to the stars” – centers around the nature of humanity, solitude and duty to one’s own heritage. Under Gray’s direction, this film stuns in impeccable camerawork and its strong, tight-knit cast of veteran actors, but his co-writing with Ethan Gross seem to have been left behind on Earth with less-than-captivating, dull dialogue.

In the near future, astronaut Roy McBride (Brad Pitt) sets out into the solar system in search of his father, Clifford, (Tommy Lee Jones) who, years prior, began work on a cosmic project and who subsequently disappeared from all communication with Earth. Roy is sent to Mars in an attempt by the government to reestablish communication with his father after a series of disasters, called “surges” appear across the solar system and on Earth – disasters that are now linked to Clifford’s expedition, the “Lima Project.”

The promise of a happy ending for Roy quickly goes south as he realizes the extent to which government officials in charge of this operation will go to protect classified information; masterful on Gray’s part to mystify every character to the point of our own mistrust in everyone but Roy.

Donald Sutherland plays Colonel Pruitt, an old friend of Clifford who accompanies Roy on his journey to Mars. Shadiness is hardly strong enough to describe the way Pruitt strolls around Roy before and after his trip. Helen Lantos (Ruth Negga), director of the facility on Mars, gives Roy a warm welcome to the planet before he is yanked away from Helen into a dark sound-proof room, where he is to record messages to his father. Helen herself seems shady too, but we learn to take risks with Roy and trust Helen, as sometimes taking risks is the only way to fulfill a duty.

Roy heavily narrates the film alongside his own personal journal entries (psychological tests, actually) required of him as an astronaut, which brings us into the mind of a man wringed of all emotion, a man so deadpan and empty in tonality that at times you may feel the need to check your watch. A hefty two hours of footage filled to the brim with vibrancy and sometimes – strictly sometimes – absolute excitement. Dialogue is not so much a strong suit of “Ad Astra,” and occasionally the plot seems to bring up moments worthwhile of exploration for the sake of emotion, only to sweep them back under the rug.

Just another space movie? No. Groundbreaking? No. But “Ad Astra” will surely leave you amazed at the questions of the universe and, ultimately, our future.