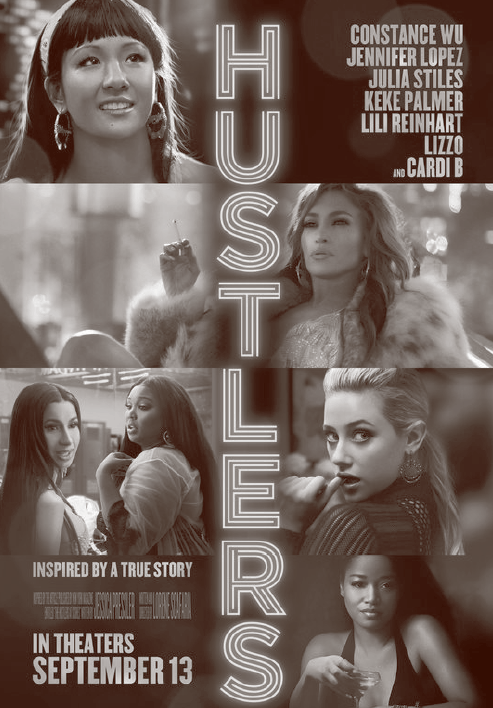 ‘Hustlers’: a little naughty, a lot of fun

By: Tamera Twitty
In: Features

Loosely based on the actual crime spree committed by a group of exotic dancers in the 2000s, ‘Hustlers’ follows a star-studded team of strippers as they come up with a way to make ends meet during the recession. Jennifer Lopez, Constance Wu, Keke Palmer and Lili Reinhart star as the film’s core members of the “gang” that forms. Their plan? Drug rich men and rob them for all they can.

Let’s talk J.Lo. This is a fairly different role than anything she has done before. I knew that she was going to look great going into this, but hot-damn she looked great. Lopez’s Ramona is a character that seems a bit mysterious but ultimately becomes the ringleader of the group. There is a scene early in the movie where Ramona is giving Wu’s character a lesson on pole dancing. Up to this point, the dancing was vulgarized by the drunk, sweaty men; the money and the incredibly revealing stripper outfits. But in this scene, as Ramona takes to the pole, the camera pans out just a bit and a Frederic Chopin classical ballet engulfs the scene; it was beautiful. It displays the strength and grace it takes to be an exotic dancer.

‘Hustlers’ revolves around the market crash of the late 2000s; and dammit, something that this film does so well is making it feel like it was really filmed in 2008. This was done particularly well with the music, with artists like Fat Joe, 50 Cent and Britney Spears all making appearances on the soundtrack. There are also moments in the film where time is referenced by a quick glance to the TV that would show a scene from the first season of Keeping Up with the Kardashians, or Brian Williams reporting on the impending recession. But it can also be seen in the subtleties of the giant black escalade that everyone wanted back then, or the Juicy Couture velour tracksuit that J.Lo wears.

Most notably at the peak of their exotic dancing careers, right before the market crashes, there is a scene where Usher (played by Usher) comes to the club. “Love in This Club” plays as he throws stacks of money on the dancers. We as the audience know what the characters do not: in the coming weeks the recession begins. Directionally, this scene makes the crash much more dramatic.

This is where the actual hustle begins.

In the 2nd act of the film follows the gang of strippers during the crime spree where they cultivated a cocktail of Ketamine and MDMA in order to make robing their clients easier. All the while they are buying houses, paying off debts, and shopping. As an audience member, I knew these were terrible offences but just couldn’t help but to root for them a little. It really speaks to the great acting and the solid character writing of this film.

This movie also makes some cool directional choices as well. Some of the shots were just gorgeous and aren’t necessarily obvious. Like during the club scenes when two characters are talking, but there are blurred dancers in the background. In one scene a police wire is attached to one of the dancers, and while this is happening the audio of the movie is a little stifled; as if the audience are the ones listening in.

Ultimately, ‘Hustlers’ was a great late summer release. A little naughty, a lot of fun. It won’t be making my all-time favorites list, but I would definitely watch it again. I would give the movie a 4 out of 5 stars overall.

“This whole city, this whole country is a strip club,” Ramona said, “You just have to know who’s throwing the money and who’s doing this dance.”