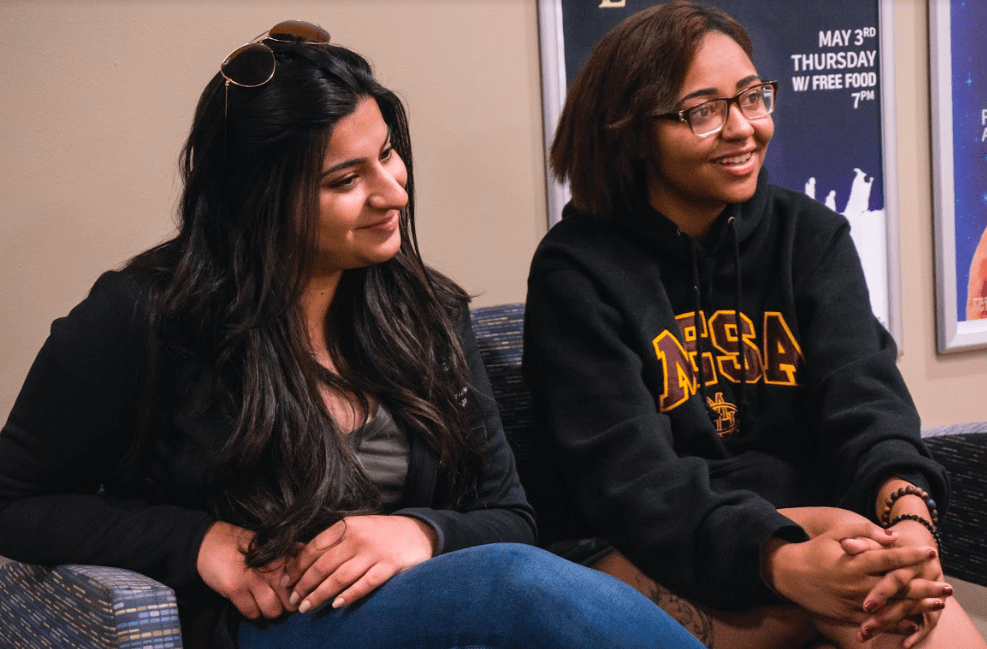 By: Isaiah Cordova
In: News, Uncategorized

Juniors Sierra Brown and Laveen Khoshnaw are preparing to lead the student body for the 2018-19 school year.

Sierra Brown, an English major, will serve as president of Student Government Association alongside Laveen Khoshnaw, a biomedical science major, who will serve as vice president. Laveen and Brown were elected to their positions on March 27 with 38.5 percent of the vote.

Their ticket ran on the platform of unity, providing more resources to students and collaboration among other colleges.

The Scribe interviewed Brown and Khoshnaw about their upcoming term.

Q: What are your plans for the next year in student government?

Brown (B): The first plan is just going to be implementing the summer committee aspect.

So, with that, it really gives us an opportunity to unite as a student government before we start the year.

“We’re not always going to be on the same page, but at least it lets us get on the same leadership styles page and really kind of see where we’re going and what we want to do, if anyone has any ideas right now that they don’t really know where to start and want to try to implement from the get-go.

Khoshnaw (K): We definitely want to remain flexible. We’re not going to go in with some wild agenda that’s just ours, which is another part of the summer committee, where we want to establish this kind of voice, this foundation, to just get this group going on what we want to pursue throughout the year.
We’re establishing our relationship with Colorado College, which will be partnered into this overall network, really building UCCS into the community.

Q: How would building SGA and UCCS more into the community benefit students?

Inspiring our SGA actually inspires them to go out and advocate for the students because that’s what they’re sitting in SGA for: to be advocates and to be communicators for the students. And if they’re not inspired themselves to make a change or to not go out there themselves and change things throughout their school and their program, how are we going to expect students to vote them into office again to change things?

With SGA, it’s supposed to be a branch between the students and administration. And with enough people bothering and bugging administration, things can be done.

K: UCCS students are really fortunate to have clubs and organizations (and) the different avenues that we do have on campus.

We always talk about during orientation that we have more than 200 clubs and organizations that students can get affiliated with. And the interesting thing about the Colorado Springs community is that we have these higher education institutions, predominately UCCS, Colorado College and the Air Force Academy, that attract a very different demographic.

Now that we’ve got this extended community, why not broaden our interests? If we can make a relationship between UCCS students and (Colorado College) students with, for example, our MOSAIC office, and they bridge with their MOSAIC office, then we’ve just capitalized on our resources and we’ve just reached across to downtown Colorado Springs, which in turn will open up opportunities for college students.

Q: How are you going to implement your campaign platform over the next year?

The goals that Sierra and I had discussed with what we want to do with our summer committee is going to be an immediate push of that unity and making sure that actual business gets done when school starts rather than trying to learn the ropes.

Of course, that’s still going to happen; not everyone in SGA is going to be here over the summer, but if we can build this foundational kind of culture that we want our SGA members to get right into right away, then the learning ropes part will be easy, letting us get right to business.

K: We’re going to implement, I would maybe even call it a policy, where student government members are absolutely required to have a presence in every type of club and organization.

(We’re) not necessarily making their decisions for them, but being there as a relay, as a liaison, bringing it back to student government, making sure there are resources there for every club and organization—all 200-some of them.

And again, capitalizing on the freshman seminar outreach. We already started our talks with CC, so the unity and outreach kind of thing is already in the works, and I think it will be finalized over the summer, really ready to swing into the new year.”

B: Another aspect of our platform that makes it easy to implement it over the next year is that we set very realistic goals. A lot of people wanted us to attack a lot more pressing issues, like parking. While we do plan to definitely look more into parking, that’s something that we can’t do alone.

We have to reach out to more students, not even necessarily administration, and the students have to actually want to move to something better and be willing to talk about it and discuss it and go to meetings and really just involve themselves in the process.

Setting realistic goals of ‘we want to inspire you,’ and ‘we want to offer you resources,’ and just offer you what you need in terms of getting these bigger projects done. I think that’s really what makes it a possible goal to implement our campaign platform over the next year.

“We are the technical face of SGA, but the senators and the (Judicial Board) and the director of finance, they are really the backbone and they are the working people of the student government. Not to say that we’re not going to work and we’re not working, but we’re here to make sure that SGA is doing what they’re supposed to do.”

Q: What are your goals for outreach within senatorial positions?

K: It’s important to make sure that the students understand. Some students really just kind of expect this position to be like, ‘I have all the policies of the university in our hands now, and we can just edit them and make whatever changes we want,’ and that’s absolutely not the case.

We’re students. So, what we are planning on absolutely doing is making sure that we can utilize our new network, our new resources to facilitate these conversations and instill this new culture of ‘students make change.’

We want to do it all. We want to fix parking, we want to build the bridge from West Edge over to by Centennial, but we just can’t do it alone. I think we’re really just asking students to come to them and re-inspire them to inspire the change.