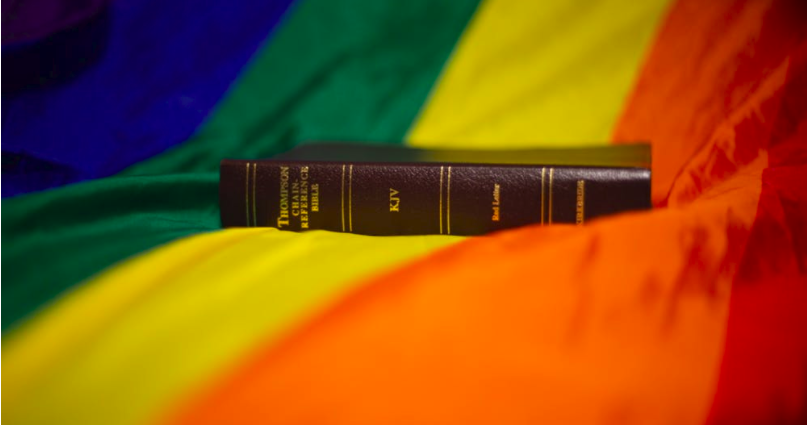 Can you be LGBTQ+ and Christian?

By: Brandon Flanery
In: Opinions

Can you be LGBTQ+ and Christian?

This question is critical, as it’s the primary reason why U.S. Americans are leaving evangelical churches.

According to Public Religion Research, 70 percent of millennials are alienated by churches’ judgments towards LGBTQ+ individuals, and with good reason.

According to the Trevor Project, “LGB youth are almost five times as likely to have attempted suicide compared to heterosexual youth,” and according to the American Journal of Preventative Medicine, religious LGBTQ+ youth are significantly more likely than their non-religious peers to attempt suicide.

We can’t afford to not have an informed opinion on this. There are literally human lives at stake, and unless you’re burying yourself underground (literally or symbolically), you will come into contact with LGBTQ+ people at some point in your life. We’re statistically everywhere. Shoot, you might even have one as a kid. What are you going to do then?

With all that in mind, my hope is that I can help you start the journey with this article.

First off, why me? Well, because I’m Christian, gay, was raised in the church, worked in ministry, I left ministry and Christianity because of the pain I endured. But I came back, researched and prayed through my position on being gay and Christian, and I’m now building believr, an app that exists to help LGBTQ+ Christians find belonging and connection in love.

I don’t say that to toot my own horn. It’s to help build some ethos as quickly as possible (after all, I’m already breaking the character limit; my editor is going to kill me).

So, for sake of brevity, I’m going to point you to two amazing resources that will elaborate far more succinctly that I ever will be able to in a short article. The Reformation Project and Beloved Arise are two organizations that have catalogued resources like books and videos by scholars to show you that it is okay to be queer and Christian.

Reading any of the books they recommend is a great start. In summary, they will all tell you the same thing: the condemnation of LGBTQ+ people is wrong, and any verse that alludes to the condemnation of LGBTQ+ people is missing context and has been mistranslated over the centuries. In fact, most of the verses about “homosexuality” in the Bible were translated as “pedophilia” all the way up until the 1950s.

But I’ll let the experts speak on this, because they’ll do a far better job. What I want to do in this article is a little more meta. I want to bring into question what it means to be a Christian and how that affects those who are LGBTQ+.

When growing up, I was told insensately, “Christianity isn’t a religion; it’s a relationship.” Here’s the problem: I would hear it from the most religious people. Here’s the other problem: even though it’s a hypocritical cliché, they’re right.

It’s all about what the human does in relation to the deity in question.

That’s not what Jesus came to do; He didn’t come to create a new way of getting to God.

The reason Christianity (in its purest form) is actually different than all other religions is that humanity had been trying to get to God for millennia, and we weren’t able. We’re not able. Instead, God said, “I’m coming to them, and I’m making all this right.”

The word “gospel” literally translates to “good news.” If we’re talking about another way to get to God, that’s not good news. None of us can make it, regardless of what the “magic formula” is. That’s the point of the Bible — hundreds of humans took a good shot at getting to God, and none of them did. So, God had to come to us.

Christianity is truly just about trust. It’s not about what I do to get to God, including my sexuality. It’s about knowing humanity has done a shit job of being perfect. We keep fucking it up. We were never enough. But Jesus was enough, and trusting in His love, in His goodness, leads us to loving Him and loving others. That’s the work of Christianity.

I want to point to two places in the Bible to make a point here.

The first one is Genesis 1-3 (you know, the verses that make it so that Christians don’t believe in evolution). In this story Adam and Eve ate from the Tree of the Knowledge of Good and Evil (religion), and it cursed them and all of humanity. If we continue to live out of this tree of religion, we’re going to keep cursing humanity. Just look at history — anyone heard of the Crusades? Or the wars in Ireland? Or what’s currently happening in Kashmir?

Instead, we’re called to life in the Tree of Life, which is living in connection to Jesus (relationship), who is the embodiment of Love.

Which brings me to my next story in Acts 15.

In short, here’s what happened: non-Jews, or “Gentiles,” were becoming Christians; Jewish Christians were complaining they weren’t obeying the law; everyone was confused on what to do. Were these Christians who wouldn’t obey the law actually “saved”?

Here’s the crazy part, and not a ton of Christians talk about this.

In response to this unrest, the 12 disciples of Jesus came together at the Council of Jerusalem and prayed. After which, they decided that Gentile Christians should follow three rules.

What? Can humans just change the rules? They can if there’s a higher rule that is helping them navigate the world. “A new commandment I give you: Love one another. As I have loved you, so must you love one another” (John 13:34).

Jesus came to fulfill the law, to fulfill religion, because we couldn’t make it to God. After He took care of it all, He says, “Go love.”

The reason the 12 disciples of Jesus gave instructions (not laws) to these Gentile Christians was not because Jesus got it wrong. They were fulfilling His new instruction; they were teaching the first Christians to love people in a new context that was foreign to them.

And that’s what Christians are called to do — to love God and people in our current context. And according to that context, we value women, we value egalitarianism, we value racial justice, we value equity, and we value our LGBTQ+ brothers and sisters because they are worthy of love.

The culture to which the Bible was written used sodomy as a way of degrading conquered nations, of using power to abuse those who were powerless. It wasn’t about a shared love. That wasn’t their context. But that is our context now, and Christians can fulfill the words of Christ, loving our neighbors by believing and trusting that their LGBTQ+ brothers and sisters and non-binary siblings are loved in the eyes of God, and that His sacrifice through Jesus was more than enough for us all.

Regardless of gay or straight, cis or trans, none of us could make it and all of us believed God was cruel. The message of Christ is that He was able and that He is love, if we believe.

“Who then is the one who condemns? No one. Christ Jesus who died — more than that, who was raised to life — is at the right hand of God and is also interceding for us. Who shall separate us from the love of Christ? … I am convinced that neither death nor life, neither angels nor demons, neither the present nor the future, nor any powers, neither height nor depth, nor anything else in all creation, will be able to separate us from the love of God that is in Christ Jesus our Lord” (Romans 8:34-39).