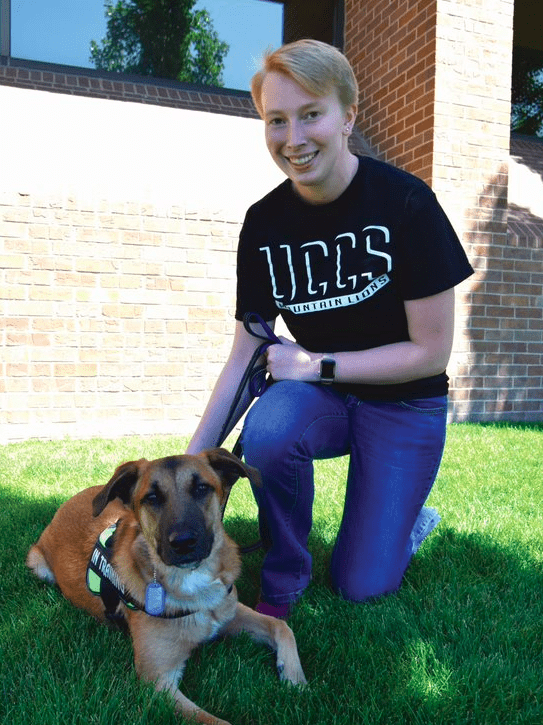 Do’s and don’ts of interacting with service dogs

By: Julia Jackson
In: Features

Spotting a dog out in public can be an exciting affair; pointing it out to your friends, gushing over it, hoping its owner will bring it your way so you can pet it. Next time you want to cuddle that puppy to death, the owner of a special kind of dog would like you to be aware of some proper etiquette.

Taylor Wallau is a junior triple-majoring in criminal justice, political science and philosophy. Koda, an honorary student on campus, is in training to be a certified service dog.

The two began working together in June, starting with the basic commands any household dog learns: sit, stay, roll over, etc. After that, almost one-year-old Koda had to learn to perform more complex and specific jobs.

“Koda’s responsibilities include alerting to anxious behaviors to when panic attacks are about to happen, and preventing those,” Wallau explained. “The difference between emotional support animals and service dogs is that service dogs are trained to do particular tasks in relation to their owner’s disabilities.”

Students may encounter both types of dogs on campus, but service dogs will often wear vests to distinguish them. The distinction is important because service dogs and emotional support animals (ESA) have different rights.

“Service dogs are allowed wherever a human goes, with some exceptions, like if it’s going to jeopardize the safety of the workplace, or the sterile-ness of a place, like a lab,” Wallau went on to explain that the lab is no place for Koda anyway.

While Willau originally began her college career as an engineering student at CU Boulder, she faced many struggles there that led her to return to Colorado Springs where her family lives, and to go forward in her academic endeavors with Koda by her side.

Koda works with Wallau and with a private trainer. The National Service Animal Registry requires service animals to take a public access test, along with the proper certification, although under the Americans with Disabilities Act, there is nothing that says that you have to get a service dog from a particular specialized organization, according to Wallau.

Dogs trained by the military or the police must pass a similar test, and their behavior will help differentiate what kind of job they might be best suited for.

What makes a good service dog is not breed or age: “[It] really depends on their temperament, if they’re good around people, if they’re comfortable in different situations with unexpected visual and audio stimuli,” said Wallau.

Even though service dogs are trained to remain calm in these types of situations, unaware bystanders can still create problems. “The general rule is no distractions, no petting, no eye contact, no noises,” Wallau said. “They’re working, they have a job to do.”

Especially with a dog in training like Koda, it is critical to reinforce the idea that he cannot interact with every passerby unless he is released to do so.

It might be tempting to interact with a dog whose friendship you crave, but before you coo at him about what a good boy he is, always make sure you ask permission. “In my mind, even if it’s not a service dog, you should be asking the owner if you can pet the dog in the first place, and especially when it’s a service dog,” said Wallau.

It all depends on the handler’s preferences, and if you receive a no, think of it in the same terms of consent you would apply to people. Dogs may spark joy for you, but for some people, they are an essential part of navigating daily life.

2019-09-24
Previous Post: “The Goldfinch”: not the tear-jerker it should be
Next Post: Javaloto: a charming cafe with something for everyone