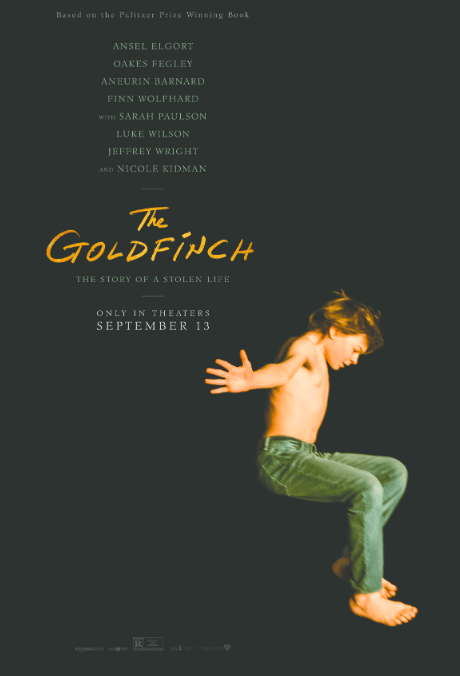 “The Goldfinch”: not the tear-jerker it should be

Ansel Elgort (“The Fault in Our Stars” and “Baby Driver”) stars once again in a story jam-packed with brutal emotion, but his soft eyes and impressive filmography do all but let “The Goldfinch” be the tear-jerker it deserves to be.

Based on Donna Tartt’s novel of the same name, “The Goldfinch” jumps back and forth between past and present as Theo Decker (Elgort) from the Upper East Side of New York City faces the incredible hardship of losing his mother in a museum explosion — all the while saving a prized painting and keeping it as his closest secret for eight years following the explosion. Looking loss, love and drug addiction straight in the eyes, Theo lives the life many fear having themselves.

Much of the film shows us Theo’s adolescence as a 13-year-old, which is already such a dramatic time in everyone’s life. This truly is where the film shines; young Theo (Oakley Fegley) expresses grief interestingly, not crying much but instead displaying signs of shock from trauma. Oakley Fegley’s performance is frankly impressive, it is almost like an invitation for the audience to enter his living nightmare.

Two scenes are especially impressive, probably because there is less dialogue and more pure emotion. In both scenes, Theo wakes up suddenly from a night terror hyperventilating. Theo’s new friend Boris, played by the massively popular Finn Wolfhard, hugs Theo in the second scene, calming him in a soft tone so he can fall back asleep. Two emotional moments, one terrifying and the other heartwarming.

Ansel Elgort’s scenes as adult Theo are less jarring, less heartwarming, often just confusing. “The Goldfinch” seems to lose some major pieces in between the explosion and present day. As an adult, he is an antique dealer, mentored by Hobie (Jeffrey Wright), and he is almost emotionless and deadpan in nearly every moment. Perhaps just a product of Elgort’s acting, perhaps purposefully a result of Theo’s trauma.

Theo’s reconnection with the Barbours, who had taken him in temporarily after the accident, faced problems of its own, problems that could not be rescued by Nicole Kidman’s portrayal of Mrs. Barbour. Not to mention the naming scheme that tries too hard to be unique and interesting: Kitsey, Platt, Toddy and the normal Andy (plus many more scattered throughout the film).

For the most part, the emotions are all there for a typical audience to connect to. But the situation itself does less of a good job of releasing our eyes’ floodgates. After all, not everyone will bridge the sentimental gap between an average middle-class life and Theo’s immediate access to seemingly endless wealth. Thankfully, his not-so-glamorous father, played by Luke Wilson, fills the hole for audiences not connecting.

Director John Crowley’s rendition of the story is satisfactory with a fascinating color scheme and shots that steal the moment and work their way into the deepest points of our souls. A particular focus in the film are the museum scenes, where Theo’s mother is blurred from vision, and close-ups take precedence to enhance the tension. Best of all are the repeating images of the explosion itself, gray dust engulfing the silver screen.

While an interesting film to watch, it did not have the emotional effect I thought it would have, but if you cry easy, it may manage to get a few tears out of you. With such a star-studded cast, at the very least it is a safe bet that you will enjoy at least one of the big-name actors.