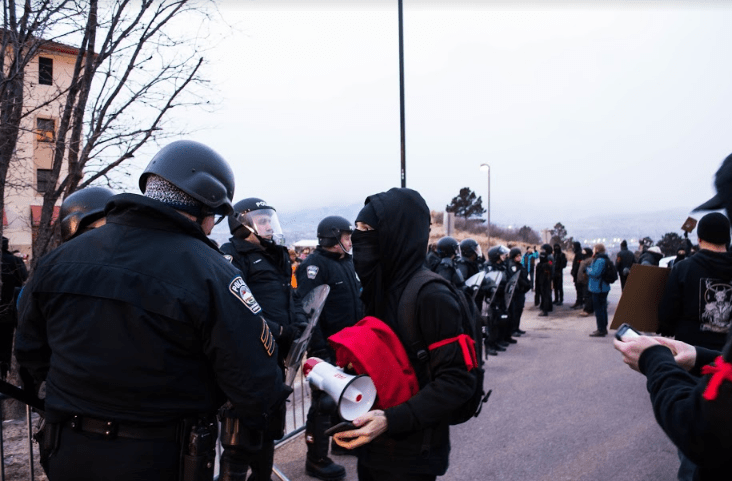 Groups protested, police line up at sold out Yiannopoulos event

A group of protestors from the Colorado Springs Anti-Fascists and Showing Up for Racial Justice lined up across the street from the Upper Lodge to protest Milo Yiannopolous’ event, “Why the Left Lost the White Working Class,” on Jan. 26.

The protestors arrived in the designated free speech zone, located on Lot 431, at 4:30 p.m., but did not stay there.

The two groups walked down the hill arguing with security about where they were legally able to protest.

They settled on the edge of the street outside the Lodge, where students and visitors were waiting in line to get into the event.

Members of the protesting group said there was no official leader of the movement. The group walked through the resident halls and up the spine, and started chanting after Yiannopoulos started speaking. 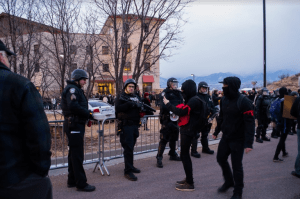 Chants included “No KKK, no fascist USA,” and “Trans rights are human rights.”

According to Sabrina Wienholtz, director of Student Clubs, Organizations and Leadership, the room capacity for the event was 195. This number included speakers, technicians and security.

Chancellor Pamela ShockleyZalabak organized a campus appreciation event on the same night, but came to the Upper Lodge before the event started to make sure that students were being safe.

“I’m just here to make sure everybody stays safe—not that I’m doing anything, but just getting a sense of the safety of our campus,” she said.

UCCS and CU Boulder police monitored social media to assess the potential actions of protestors before the event, according to UCCS detective Martin Toetz. Public Safety anticipated the presence of 80 percent of the