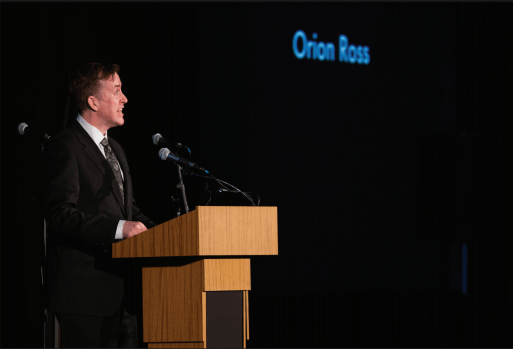 Before the spring semester started, TheatreWorks’ artistic director and founder, Murray Ross passed away on Jan. 3.

In celebration of his life, UCCS hosted a memorial service on Jan. 19 in the Gallogly Events Center.

The service featured songs, skits and stories shared by around 20 speakers who knew Ross from the time he was a kid up to his days teaching English at UCCS and impacting the theater community in Colorado Springs.

Several guests attributed their careers and love for theater to Ross, explaining to the room full of people the different ways he made their cast rehearse a play and the passion he brought to his job.

After Chancellor Pam Shockley-Zalabak and Ross’ son, Orion Ross shared their words, Bob Seidman, a colleague of Ross, spoke on his family and character.

“Murray Ross did not have a single mean bone in his body,” he said to the audience.

Upon hiring Ross, Pellow said he taught well and was an invaluable colleague.

“He was wonderful; he dazzled us,” Pellow said.

“Thank you for having been a part of my life for 40 years.”

Among the speakers, Ross’ granddaughters gave their tribute with a short speech and a song.

Later on in the memorial service, a group of Ross’ friends and colleagues listed titles and quotes from all of the plays that Ross directed.

Multiple speakers also described him as a person who knew how to have fun and the impact he made in their life.

Students, staff and faculty who are interested in donating a gift to the Murray Ross Artists Endowment Fund with the University of Colorado Foundation can contact Jaime Garcia at 255-5105 or [email protected]