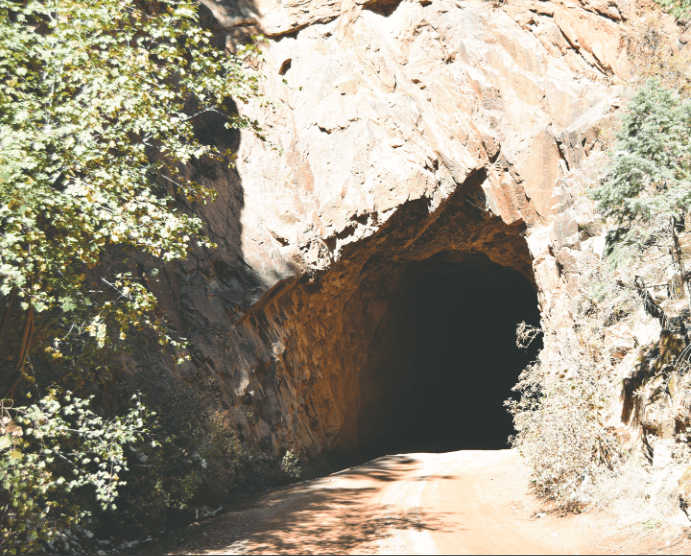 By: Devon Williams
In: Culture, You See CS

With Halloween just around the corner, there is no shortage of horror movies or haunted houses for those who love getting spooky. In Colorado Springs, there are a few spots that are rumored to be haunted, including Gold Camp Road and Black Forest.

Gold Camp Road is said to be severely haunted. Originally, there were nine passages dug throughout the hills, three of which have collapsed due to age and vandalism. The most prevalent tale is that one of the tunnels had collapsed while a school bus was driving through it. According to stories, children were returning to Colorado Springs from Cripple Creek after a field trip and just as the bus was travelling through tunnel number three, it collapsed. The tunnel is about a mile hike from the trailhead above Helen Hunt Falls.

It is said that you can hear the children’s spirits laughing and giggling in the first and second tunnel. While going through these tunnels, the children supposedly leave their fingerprints on vehicles and scratch people. In tunnel three, it is said you can hear their screams. These stories are most likely false, as the tunnel collapsed in 1998 and no reports of death can be found linked to the incident. Despite this, other tunnels in the area are said to be haunted by workers killed during construction.

It is not a scary place to be during the day, as the sun hits the trees and it looks just as beautiful as any mountain spot. But at night, when you cannot see your surroundings, the sheer darkness that envelopes the tunnels is overwhelming and the narrowness of the tunnels gives the feeling of claustrophobia.

Based on my experiences there, I cannot say that Gold Camp Road is not haunted. I have been to Gold Camp Road twice, the first time in May 2017 and then this month. The first experience I had at Gold Camp Road was by far the weirdest. I was with a group of my friends and we were driving through the tunnels. Around 10 p.m. we parked the car to get out and walk inside the tunnel. When we went to get our stuff from the trunk, we saw a very evident handprint on the window. Although this was the only strange part of the night, it was enough to give me the creeps.

The second location, Black Forest, feels the most haunted to me, especially at night. Surrounded by dense, tall trees, that eerie feeling that I am all alone trickles in.

The history of Black Forest is from a story of Beth and Steven Lee and their two boys. The two Lee boys had consistently reported seeing weird lights and shadows in their rooms, and lights and appliances would turn on and off by themselves. One of the strangest phenomena was the untraceable chemical odors that burned the family members’ eyes and throats. Over the next four years of living there, the family had 62 unexplained “break-ins.” The El Paso County Sheriff’s Department opened an investigation in 1993 and conducted 45 follow ups, but they never found any criminal activity.

According to an article by Magalie Noebes from ourcommunitynow.com, “The house has been visited by several psychics and paranormal experts who unanimously agree the Black Forest House is one of the few locations on this planet that connects our world to the next. The closet in the master bedroom is suspected to be a portal to the ‘other side,’ and the 100-year-old mirror in the room was an endless source of photographs of apparitions and floating faces.”

The first time I visited Black Forest was with a group of guys and my best friend. The guys wanted to try to see the house, which was an awful idea. One of the neighbors had come out screaming and told us to get off their property even though we had not passed any gate or any trespassing signs. I would not recommend trying to see the house due to the amount of security and hostility from neighbors, but go at your own risk.

If you want to start off your Halloween festivities right, check out Black Forest and Gold Camp Road to get into the spirit of the season.