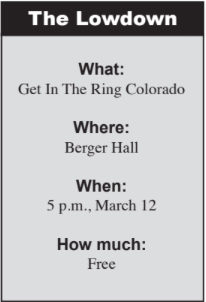 International students who come to study at UCCS have had both challenging and rewarding experiences of their own.

In the fall semester of 2017, UCCS hosted 244 international students from over 46 different countries. For some of them, the cultural differences between their home countries and America’s were quite evident; however, their experiences here have been enjoyable.

Originally from Hungary, Cornell Szabo, a graduate student earning a master’s of business administration, found the transition to American life to be easier due to his familiarity with Colorado Springs.

“My cousin has a good reference to this MBA program over here. It was straight forward to come back over here. I have contacts here and I know the city,” said Szabo.

Szabo’s hometown has a population of 30,000 people. It is a rural area that mainly grows corn and wheat.

“I see similarities in Colorado Springs and my hometown. The population is scattered and that makes it livable, just like my home town,” he said. “I like this very much to have nature around here, and the mountains are a beautiful view. That makes a difference.”

UCCS has provided Szabo with multiple resources to be successful, he said.

“The level of resources on campus, is very important for me because when I came over here, I could not imagine what resources you have. I consider the library and the book system first class, and I wish we had something like this back home for research and everyday student life,” he said.

Overall, Szabo has enjoyed using the resources on campus and learning more about the American education system.

“What I see over here is that UCCS, and I believe the American education system, is based on not only teaching but service for students. For example, you have incredible resources as part of your education and tuition fee. (Faculty) help student to the best of their knowledge, and I like this performance based system,” he said.

Szabo was interested in receiving an education in the U.S. as he believes that an MBA is beneficial in succeeding in today’s labor market. After completing his degree, he plans on gaining some work experience here before going back home.

“We will see what the future holds for me, but I am open to all options. I will do my best to use (my visa status option) and stay over here for a year and gain expertise and training in the field I am targeting,” he said.

However, one of the biggest challenges he has faced is missing his family.

“I have a niece and a nephew, five-years old and five-months old. That’s a challenge to tackle on a personal level. You have to leave your family members, history, and memories back home,” he said.

However, Szabo constantly reinforces his belief that he can accomplish his goals as long as he never gives up.

“It is kind of tough, but you have to do whatever it takes to fight for your dreams. There’s a will, there is always a way,” he said.

Tsion Gemechu, a freshman major from Ethiopia, immigrated to the U.S. with her family in 2015.

Before Gemechu became a student at UCCS, she has had some experience going to school in both Ethiopia and high school in the U.S.

Because she grew up watching American films about cruel teenagers bullying kids in high school, she was nervous starting school in the U.S.

“A lot of people asked if we speak English and were trying to decide what level of school they should place (me and my brother) in. They didn’t know we could do it. By the end of the year, me and my brother got into national honor society and the golden medal,” Gemechu said.

“When I got into high school, everyone was sweet, students and teachers were so sweet to help me. Movies were not the reality for me.”

One of the biggest differences Gemechu noted between her schooling in Ethiopia and in the U.S. was that after students passed tenth grade in Ethiopia, they needed to choose between taking natural or social science.

Natural science would lead to a career in medicine, engineering or other highly qualifying profession. For those who chose social science, their future would be in economics, arts or business.

Gemechu chose social science while she was in Ethiopia but was not thrilled about having to take six years of schooling to obtain her law degree.

When she began studying at UCCS, Gemechu decided to major in economics with a pre-law minor. Once she completes her bachelor’s degree, she plans on applying to a law school.

“When you learn in the U.S., you can choose to work anywhere you want, but not in Ethiopia. The benefits here are good and there are more technology advances,” she said.