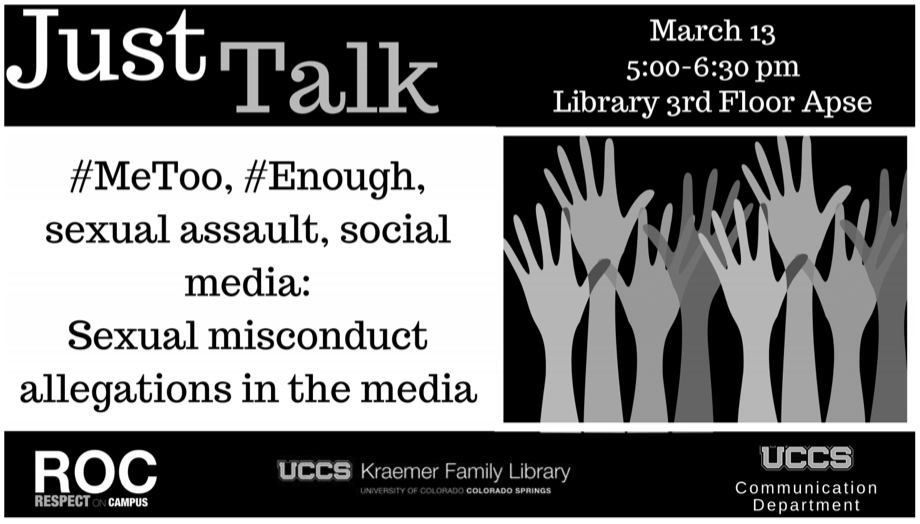 Sexual misconduct is the topic of discussion for the Kraemer Family Library’s Just Talk seminar.

The event will focus on how the #MeToo movement has allowed universities to navigate sexual misconduct on college campuses and how it has changed our culture.

Katie Sullivan, associate professor of communication, will present on organization, individual and group thought, as well as how media impacts the #MeToo movement.

“They all kind of have a more informal kind of atmosphere, and some are more structured than others, it tends to be more interactive,” she said.

Katasha Dawson, a women’s advocate for the Office of Violence Against Women as a women’s advocate, felt the need to discuss the movement at UCCS. Dawson works toward promoting awareness and education around sexual misconduct, such as stalking, dating violence, sexual assault and domestic violence.

In 2016, 18 crimes classified as Violence Against Women were reported to UCCS Police.

“There was a lot of sexual misconduct allegations in the media, over like 100, so I thought it would be really cool to bring in like reality or like a real perspective into the community to see how they want to discuss and talk about it,” said Dawson.

Along with Dawson, Ray Fisco, prevention and outreach manager for the Dean of Students, helped to organize this event, including other Just Talks events, such as “The F Word,” which focused on feminism.

“We thought that this was a really appropriate event to replace this just because of everything we’re seeing on the news, on Facebook, on social media when it comes to this international movement of sexual misconduct that’s happening all across the world, and how people are speaking up about it,” said Fisco.

All students are welcome to attend the event.

For more information on the Just Talk series, email Lindsay Coppa at [email protected], or call 255-3060.