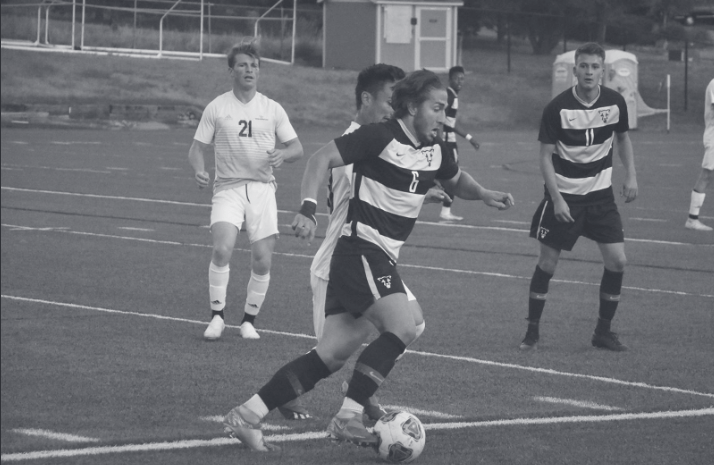 The UCCS men’s soccer team went 1-1 at home against RMAC rivals Fort Lewis College and Colorado Mesa University (CMU). The Mountain Lions, ranked No. 9 in the RMAC, are continuing to pick up momentum near the end of conference play.

Against Fort Lewis on Oct. 11, the Mountain Lions defeated the Skyhawks 2-0 on a strong defensive night. Goalkeeper and redshirt freshman Jake Zink recorded a shutout and saved the only two shots on goal in the entire 90 minutes.

Two days later, on Oct. 13, UCCS lost to CMU 0-2 in a competitive and physical match.

Though the shots on goal were equal (5-5), CMU pulled out the victory with goals by redshirt junior Peter Vandam 37 minutes in and senior Lawan Abary 82 minutes in. UCCS goalkeeper Jake Zink recorded three saves in the game.

With four more games remaining in the regular season, the UCCS men hope to gain momentum to qualify for the RMAC tournament. Standing at 3-7-1 (2-6-0 in conference play), UCCS is ranked No. 9 in the RMAC. After their loss to UCCS, Fort Lewis still sat at No. 6 in the RMAC at press time.

The game against CMU proved to be a strong performance, as the Mavericks are ranked No. 3 overall in the RMAC with a 5-1-2 record in conference play. CMU was also in last year’s RMAC Championship game, losing to the Colorado School of Mines and finishing their season as the No. 2 team in the conference.

For UCCS, the season continued after their loss to CMU with home matches against Adams State and CSU Pueblo last weekend.

These were the final home games of the season other than Senior Night, taking place Nov. 1. For Senior Night, the Mountain Lions will play against No. 2 ranked Regis University. The last time UCCS faced Regis, UCCS lost the match 3-4.