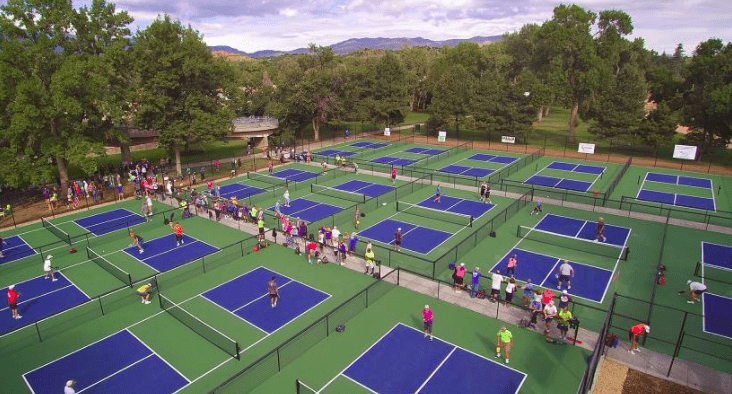 By: Annika Schmidt
In: Sports & Recreation

This summer, people of all ages gathered to utilize the new pickleball courts at Bear Creek Park. It is not uncommon to see these courts — among others in Colorado Springs — busy with dozens of pickleball players and the sounds of pickleball against paddle.

Pickleball is a sport played by two or four people with paddles on a court with a net. Its popularity has risen in the last decade, especially in Colorado Springs.

The Pikes Peak Pickleball Association was founded in 2012 with just 50 members, and now has over 1,400 active members, according to PPPA President Joe Johnson.

Johnson believes pickleball has become so popular because of access and learnability. “Pickleball is fairly inexpensive to play and equipment does not cost that much for a beginner,” he said. “We have noticed that beginners do pick up pickleball faster than, say, a beginner tennis player picks up tennis.”

Involvement in the sport also offers community for individuals looking for an active pastime. “The social aspect of it is great as well. You meet a lot of people that play,” Johnson said.

While there is no official club or club sport at UCCS for pickleball, Johnson hopes that will change. “We are getting a lot of younger players playing now, college-aged players or players that have just finished college,” he said. “That age group is just taking off.”

According to Johnson, there is a lot of crossover between tennis and pickleball. Johnson is a former tennis player himself who switched over to pickleball and is now a sponsored pickleball player.

Other PPPA players have had a similar experience. “Several members are former tennis players, and we have people that play both sports,” Johnson said.

The interest in pickleball over other racket sports is also reflected in the growing number of recreational pickleball courts in Colorado Springs. A pickleball facility with 12 courts recently replaced four tennis courts at Bear Creek Park earlier this year.

PPPA offers free lessons every Saturday through the end of September. For more information on this opportunity or to make a reservation for an upcoming lesson, visit the PPPA website.

With a PPPA membership, pickleball players can progress to another instruction based program called “Guided Play” that meets on Sundays.

Players then have the opportunity to graduate to round robin leagues that accommodate players of different experience levels, and ladder play that ranks scores nationally.

For the PPPA individual membership, there is an annual fee of $20.