Over a two-hour meeting, the Student Government Association senate approved four bills and one resolution on April 6.

Sabrina Wienholtz, director of Student Clubs, Organizations and Leadership informed senate that the last day to vote for their clubs and organizations for the ROAR awards, which recognizes clubs, organizations, students and advisors at an awards banquet on April 24.

Senate Bill 29 was presented to the senate asking for $432 so SGA will allocate money for the Educational Benchmarking, Inc. survey.

Senate voted for the bill to pass. Two or three questions will be developed by SGA and added to the survey.

One bill being presented, SB-32, asked for $5,625 for Clyde’s Cupboard, which saw 560 visits in the fall semester. The organization expects to see 550 visits by the end of this semester.

The bill was passed, and the funds will go toward a student employee to keep the inventory stocked and tracked. 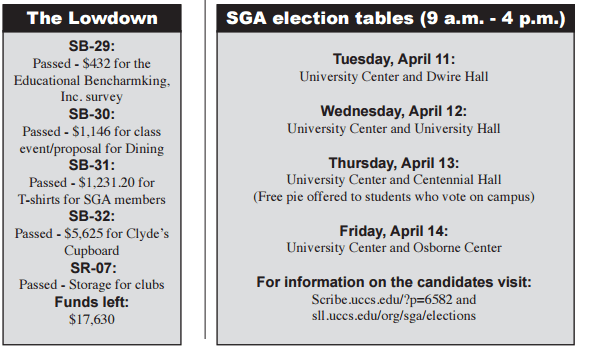