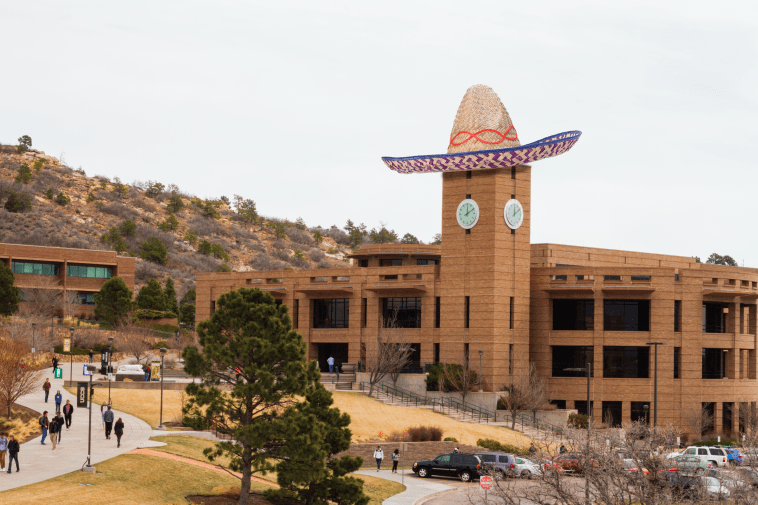 By: Marge Arita
In: News, The Scribble

After months of protest and a lawsuit, UCCS decided to go forward with installing a giant sombrero on top of the clock tower residing above Kraemer Family Library. Official university statements say the sombrero is being installed to celebrate diversity on campus.

The sombrero, which weighs over one ton and is 30 yards in diameter, cost the university $1 million to construct. The funds were acquired through an 80 percent, daily compounding loan through an unnamed check cashing institution.

Yolo Despacito, the associate director of Campus Partying and Fun, started the initiative to install the sombrero after coming to the realization that, “hats are cool.”

“Hats are cool, lol. Why wouldn’t we put one on the school?” said Despacito via email. “Yolo, am I right?”

Despacito said that the library will be closed for a week during the installation of the “epic lid.”

Protests surrounding the sombrero have ranged from it being a waste of university funds to the unsound structural nature of it and the cultural insensitivity.

Student Government Association (SGA) President Jonny Somebody has been seen shouting and chanting in front of Main Hall every day since the announcement.

“I’m the only one who asked how the sombrero is going to be paid for. Originally, Despacito said that Mexico was going to pay for it (but they are still mad about President Trump wanting to build a wall) and broke down laughing,” said Somebody. “Later, I was told that SGA is not allowed to spend money until the loan has been repaid.”

Yusef Romanov, a junior mechanical engineering major, said that the sombrero weighs too much.

“There is no way that the clock tower is designed to support that much weight that high,” said Romanov. “If they had gotten the College of Engineering to build the sombrero, it would weigh half that and cost a third of what it does.”

“Romanov is inexperienced with party mechanics,” said Despacito. “He doesn’t even wear a hat, bro.”

Hispanic student groups have been a large part of the protests over the sombrero, with one group filing and winning a precedent-setting lawsuit against UCCS.

Not only did the lawsuit go from filing to verdict in two days, which has never been heard of in the history of jurisprudence, but the student group managed to gain an injunction against the university for the installation of the sombrero.

Judge Jason Stanton had strong words for the university.

“Not only is this decision fiscally irresponsible — why in God’s name would a university buy a giant hat to put on a clock tower — but it comes despite multiple organization on campus, who are directly paying for the sombrero, saying that the sombrero is unwanted,” Stanton wrote in his statement.

Whitney Gonzalez, the Treasurer of the Union of Latino Students [Editor’s note: not to be confused with the Latino Student Union], said that the sombrero, on top of being offensive, does not even make sense.

“Cinco de Mayo, neither in the US or Mexico, has anything to do with sombreros,” said Gonzalez. “They’re completely unrelated. The only people who even wear them at parties are bigoted dude-bros.”

The Director of Campus Partying and Fun Hugh Amongus, apologized for the behavior of Despacito, and said that there is no reason for him to use departmental jargon when interacting with the public.

“We use, in the department, what is technically called ‘fun-gineered language.’ It is very specific to the applications that we implement,” said Amongus. “Despacito is great at his job, but has difficulty putting aside his enthusiasm when interacting with outside sources as a professional.”

Amongus said that no backlash or court order will stop his department from proceeding as planned.

2019-04-02
Previous Post: Scribe to be written in French, dictates UCCS
Next Post: Ent Center torn down for more parking spots