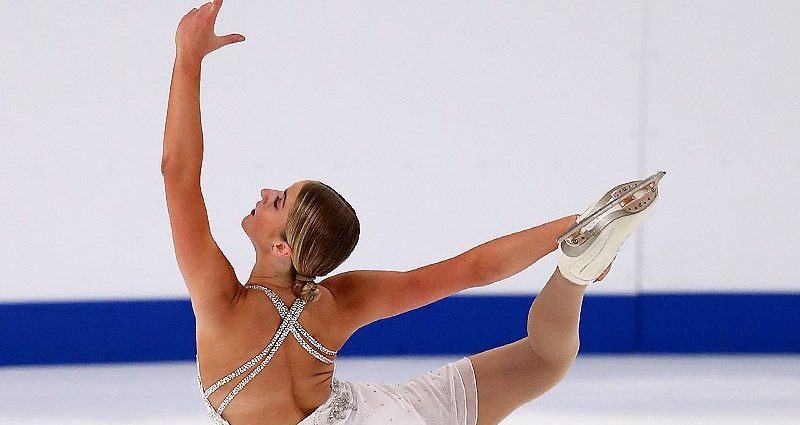 By: Tom Baker
In: Sports & Recreation

Multiple figure skating champions have passed through the doors of UCCS, with Colorado Springs hosting one of the country’s top training centers. Senior communication major Paige Rydberg is the next in this line.

Rydberg began skating at age three in her hometown of Chicago. She said her instructors quickly realized her talent as she progressed through the classes, leading to her taking private lessons early on.

According to Rydberg, she was a national-level athlete by 2011 and international by 2014. She moved to Colorado Springs in May 2017 to be closer to the Olympic Training Center and U.S. Figure Skating headquarters.

“I moved out here to have a better training environment. Because this is where U.S. Figure Skating headquarters are, and there is a U.S. Olympic training site for figure skating out here. So, it was the ideal place to be,” Rydberg said.

Rydberg decided to go to UCCS because she saw her fellow athletes’ support from UCCS. “They both were figure skaters out here, and they both graduated from UCCS. So, I kind of observe them training at a really high level while also going to school. And that kind of inspired me because I knew that UCCS has worked with athletes that aren’t student-athletes,” she said.

She felt compelled to continue her education while skating because she realized her skating career was not forever.

“Your skating eventually has to end just because of your body and aging. [Skating is] super taxing on the body. So, when my skating career ends, I plan on picking up a professional job in the communication field,” Rydberg said.

Rydberg plans to use her communication degree to work in broadcasting or journalism. She said she feels comfortable speaking in front of people from her years performing.

Her decision to balance school and skating has been beneficial in more than one way. Rydberg feels the multifaced nature of being a student-athlete allows her to manage her emotional state better by giving her an outlet if one side is particularly stressful.

She said, “I’m kind of able to turn off and on these two parts of my life, so that way if I have like a rough day in one of them, I can have the other one as my outlet, or vice versa.”

Balancing student and athletic responsibilities is not an easy task. However, Rydberg said the keys to her success as a student-athlete have been time management and prioritization.

“I love planning, so I’m a huge planner. I always look at my week as a whole and see what tasks that I need to do, like when they’re due, certain things that I need to be at skating-wise, appointment-wise, and school-wise. … So, for me, I found being successful in both skating and school was just time management,” she said.

Rydberg struggled, in the beginning, trying to balance skating and school, but as she got older, she settled into good habits. “If I want to be more successful and less stressed, I need to plan better and manage my time more appropriately,” she said.

According to Rydberg, the key to her success in the sport is her self-motivation and the staff and family around her who have supported her through the ups and downs of her career.

“They all literally support me so much and genuinely want the best for me,” she said. “My team of coaches that have never given up on me, even during the hardest times, or times where I haven’t been successful for a few months.”

She continued, “My mom has always been my biggest supporter and cheerleader. So, see, just having these people around me that believe in me, and when I’m successful, or not successful, they still love me the same.”