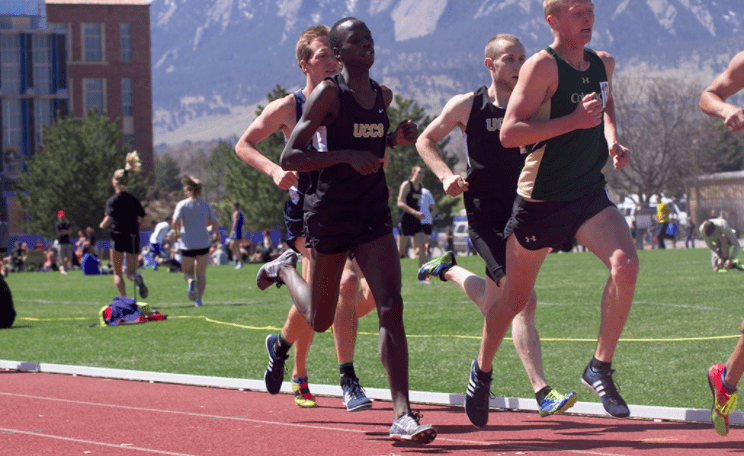 By: Luke Bennett
In: Sports & Recreation

Head coach Ross Fellows told his team before the season started that they would compete in nationals, so it meant a lot to him for it to come true.

The team sent 14 of their athletes to these national championships, and week after week both teams continued to rank within the top-20 and top-10, respectively.

The results of the NCAA nationals currently include junior Dakota Abbott setting a personal record of 15.69 meters to first place and the programs first national championship in the triple jump. He is also the university’s second ever men’s indoor national champion.

Red shirt sophomore Afewerki Zeru set a personal record in the 3000m and placed eighth place to become an all-American and add to UCCS’s score.

Senior Hannah Meek garnered her second All-American honorin the meet and made it to a fifth-place mark of 12.37m in the women’s triple jump. She earned a total of 10 team points at nationals.

The team being this dominant is surprising to Fellows but sees the team culture as the driving force behind success.

“When we started this program, we created a team culture that has thrived and it’s really taken off from that point,” Fellows said.

Fellows stated that the focus for the team this season is to “train consistently and stay healthy not only physically healthy but mentally during this season with COVID.

“We have not used COVID as an excuse but have found ways to work around it and be able to get the job done,” Fellows said.

According to Fellows, several players have improved this year, and this is evident with players being number one in triple jump and long jump.

“I think we are a really balanced team with being good in all event areas.” He also said, “It says a lot about our program having a team filled with depth.”

Meek has tracked her improvements throughout this season.

“I have definitely improved on my form as a start from scratch freshman year and now getting the hang of it,” Meek said.

She recognizes the work that it took for her to achieve her results: “I am super excited to be going and everything I did in the offseason I did correctly to get me there.”

Peter Ackah, a junior on the team who is ranked first nationally in the long jump, said, “UCCS track and field team is simply just the best.”

He battled with injuries between his freshman and sophomore year. He was previously ranked seventh nationally but worked to get into the number one spot in the long jump.

“It’s so exciting to me to be nationally ranked, and it makes me so happy, but I know more work is to be done,” Ackah said.

Ackah now has his focus on the NCAA National Championships which he is currently in. “I will not come back empty-handed,” Ackah said.

The indoor season officially ended on March 19 and March 20.