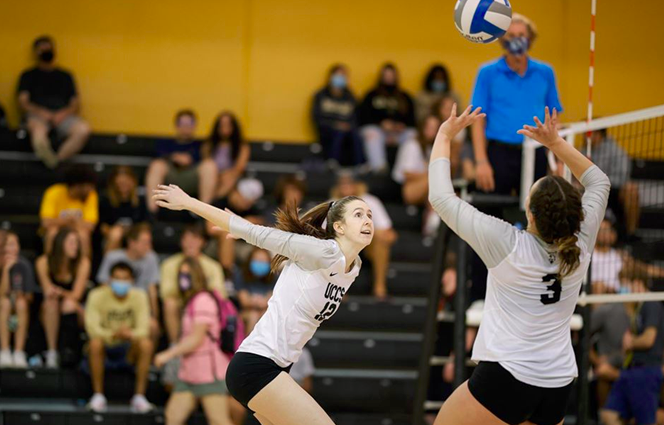 By: Luci Schwarz
In: Sports & Recreation

UCCS Volleyball concluded their season with back-to-back losses on the road.

On Nov. 12, the Mountain Lions played MSU Denver, a team that holds an 18-0 record, and left the game 0-3. On Nov. 13, they fell 2-3 to Colorado Christian University after a tight five set match with four of five sets ending within four points of one another.

The first set against Colorado Christian began with the Cougars taking the first point, but they were quickly combated by redshirt junior Lauryn Shockley, redshirt junior Hannah Ammerman and redshirt sophomore setter Emily Ettel. Each earned their own respective kills which pulled the Mountain Lions to a 4-1 lead. UCCS led 17-11 for the first half, but lost the lead and ended the first set 18-22.

Set two began similarly to the first, with the score at 20-16 prior to a time-out from the CCU coach. This allowed the Cougars to come back to 23-21. After a kill from Shockley and another from Ettel, the Mountain Lions stole the second set 25-23.

The third set saw two consecutive aces and a kill from Shockley, putting them at 3-0. The Cougars fought back but a kill from redshirt junior and middle blocker Grace Ferguson, assisted by Ettel, pushed UCCS to a 7-3 lead.

Nonetheless, the Cougars forced their way back to tie the set at 8-8. Each point up until the 16th point was tied, but after a kill from CCU senior Breanna Allen, the Cougars found the boost they needed to take the set 25-19.

Despite the previous loss, UCCS was prepared to take the fourth set and they battled for every point as they kept the ball up. Their efforts led them to win the set 26-24. This followed two attack errors from CCU and a kill from Shockley.

The last set saw UCCS emerging with the lead, but after a 5-5 tie, the Cougars pulled ahead, leaving the Mountain Lions to a defeat of 11-15.

The final results of this match left the UCCS Mountain Lions with a 2-3 final score and a record of 34-22 all-time against the CCU Cougars.

The Mountain Lions finished with a concluding record of 8-17 and a 5-13 conference record. This puts them at a 5-8 home game record while also ranking 12th within the Colorado Rocky Mountain Athletic Conference.