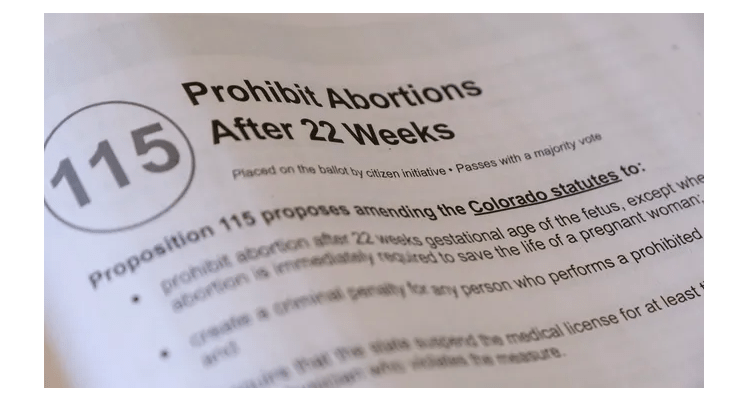 Vote ‘no’ on Proposition 115: government should have no control over women’s bodies

I feel as though my solidarity with my country, autonomy as an individual and safety as a woman are at stake this year in the form of Colorado Proposition 115, the 22-Week Abortion Ban Initiative (2020). You should vote “no” on Prop. 115, and I will tell you why.

Even if you are pro-life, this life that you are for should not always mean a fetus in a mother’s womb. You should be pro-life for the mother who is carrying this fetus too, because her life can be irrevocably changed or sometimes even lost, because of the lack of access to an abortion.

Prop. 115 is worded in a way that can be confusing with reference to trimesters and medical terms not all people understand, but despite the wording or language used, the government should not decide what happens in this type of medical emergency. Period. A recent editorial from the Denver Post, “Endorsement: Don’t put the government in OBGYN offices; vote ‘no’ on Prop. 115,” explains that “Proposition 115 would put the long-arm of Colorado’s law in the middle of the complicated, tragic, and sometimes life and death decisions doctors help women with high-risk pregnancies make every day in this state.”

We do not vote on whether a person should be able to have open-heart surgery if they need that type of immediate medical attention, so why is Colorado letting voters decide whether a mother, who could potentially die if she carries a pregnancy to term, is allowed to abort the fetus in order to live? Allowing a mother to die due to pro-life legislation is not pro-life at all; it is pro-birth and pro-controlling women’s bodies.

Kristina Tocce, a medical doctor in Aurora, Colorado, said, “We’re being asked to vote on a ballot measure that would ban abortion later in pregnancy. This is the fourth time in 12 years Coloradans have been asked to vote on an abortion ban and deny patients essential health care. Proposition 115 would force patients to continue a pregnancy with no exceptions for health or individual circumstances — even in cases of rape, incest, risks to their health or a lethal fetal diagnosis.”

Politics should never be a part of a medical decision, which is between a patient and a doctor, not the doctor and the government. This would leave no room for a woman to have any control over her body, life or fate.

It is important to note that Prop. 115 would include some exceptions for when the life of the pregnant woman is at risk. However, Prop. 115 does not include any exceptions for when a woman is told her fetus will die in the womb or shortly after birth because of a severe birth defect or genetic abnormality, according to The Denver Post.

If this legislation gets passed, women will have to resort to unsafe, back-alley abortions in order to save their own lives, doctors will be put in an uncomfortable and heart-breaking situation. Our daughters will grow up in a world where a faith that not everyone in this country subscribes to and a patriarchal viewpoint that seems that have a lot more to do with power than any sort of genuine concern for human life will control a woman’s most personal decisions.

The mother, the woman, the female will be viewed more as a machine, an object, a body, rather than an autonomous human with agency and the ability to choose what happens to her body, in her life, to the fetus inside her. Nobody else should be able to decide that: not men, not Catholic women who do not believe in contraception and certainly not our government.

Prop. 115 is the first step to banning abortion, reversing the decision of Roe v. Wade and all of the progress we have made toward women’s rights not only in our state, but in our entire country. Once some power is taken away, more is taken; then we have no right over what happens to our bodies.

Vote “no” on Prop. 115 if you believe in self-sovereignty, freedom or respect women for giving you your life. Vote like your life depends on it, because if you are a female, it probably does.