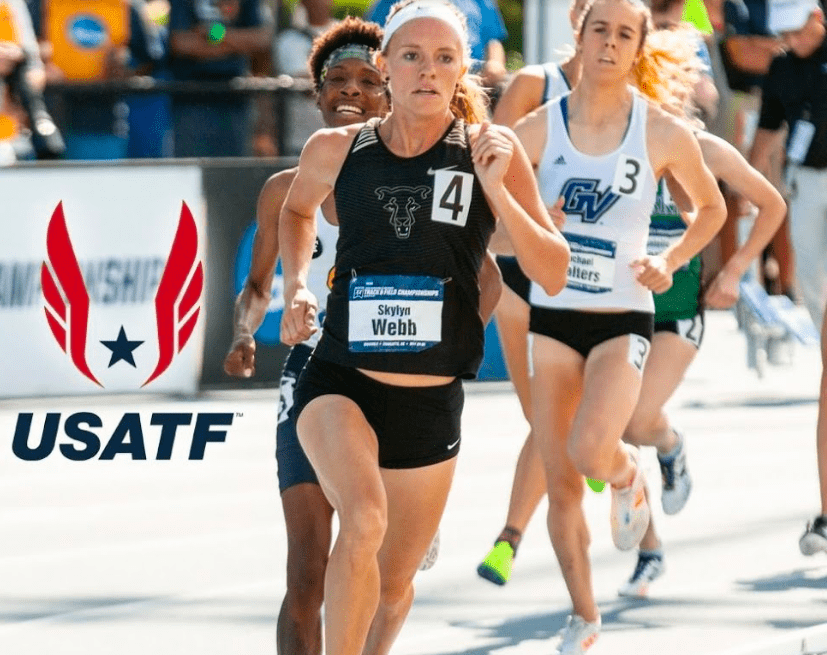 By: Brianna Kraemer
In: Sports & Recreation

Skylyn Webb, a psychology graduate student, broke the division II record in the indoor 800m at a meet on Feb. 2 at the Colorado University Invitational, hosted by CU Boulder. Her 2:04.68 time was the fastest ever recorded in D-II indoor track.

“I didn’t even know what it was, to be honest,” Webb said about the moment she finished her race, “My coach was like, ‘hey I think you broke the record,’ and they looked it up and told me so I was pretty excited.”

The achievement earned Webb recognition by both the Rocky Mountain Athletic Conference (RMAC), and the U.S. Track and Field and Cross Country Coaches Association (USTFCCCA). Both organizations named Webb as Athlete of the Week, announcing their decisions in separate statements on Feb. 5.

Webb grew up in Delta, Colorado and graduated with her Bachelor’s degree from Fort Lewis College in Durango. She has attended UCCS for her two graduate years and will be graduating with a degree in clinical psychology this spring.

“I did track in high school,” Webb said about her early days in the sport, “but I was a sprinter, so I did the 100m and 200m and never really tried anything above that, so that’s kinda interesting, but then got into the longer races later in college.”

Webb has set four records in her switch from sprint races to middle distance races. She holds the school record in the 400 and 800 meter races and set the national championship record in the outdoor 800 meter last year.

Although her time in track may be coming to an end, she has a lot to look back on and records she will continue to hold after leaving UCCS.

“I just feel really passionate about running and it’s something I really enjoy, so I think that’s something that takes it to the next level for me,” said Webb. Her love for track is what she said keeps her going.

“I think if you come across something that you are really passionate about and something you have a talent for it feels pretty cool to know that you’re putting everything you can into it to really see what your limits are,” said Webb.

Feb. 9 was Webb’s final home meet at UCCS, and last Friday was her final race of her regular college career. Webb and the rest of the Mountain Lions prepare for the RMAC Indoor Championships, beginning in Alamosa.

March 8 marks the beginning of the NCAA Division II Championships, taking place in Pittsburg, KS over a single weekend. After that comes graduation, followed by the Team USA trial meet in June, and a potential bid for the 2020 Summer Olympics.

2019-02-19
Previous Post: Spring intramurals start at the Gallogly Recreation Center
Next Post: Advice with Abby – Making your body the best it can be