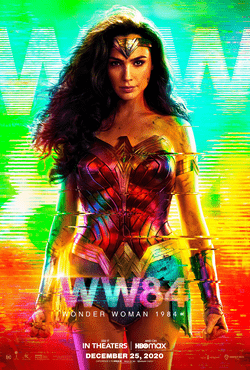 If you had a single wish that could grant you anything in the world, what would you ask for? Would this wish change if you knew it would come at the cost of yourself or someone else?

The recently released Warner Bros film “Wonder Woman 1984” explores this concept but ultimately advocates that, as character Antiope (Robin Wright) states at the beginning of the film, “anything worthwhile must be obtained honestly” and that “no true hero is born from lies.”

Curled up in bed on a Thursday night, snacks in hand, I could not help but feel rather bored with the start of the film, despite having been an avid DC Comics fan for the better part of a decade. While Gal Gadot stuns with her commitment to the role of Wonder Woman and her undeniable charm, the opener lacks real weight or entertainment value.

A young Diana participates in an Iron Man-triathlon type of race on Themyscira, but the flashback to Wonder Woman’s childhood does not feel wholly necessary to the story. This is especially true compared to the 2017 “Wonder Woman” film where the Amazonian warrior scenes provided clarity on who they were, how Diana came to be and how Steve Trevor (Chris Pine) was tied to that story.

These initial scenes in “Wonder Woman 1984” are used to introduce the movie’s intended theme and the Dreamstone — a relic created by the Greek gods which can grant a person a wish at a cost — but it all lacked tact.

However, I fully commend the cast for their portrayals of the characters. Chris Pine returning as Steve Trevor was delightful and Diana, now much more mature and world-wise, is able to introduce him to new inventions and 1980s fashion.

Kristen Wiig’s induction to the DC universe as Barbara Minerva, or Cheetah, felt compelling and humanizing, compared to other renditions of Cheetah in DC Comics that were unexciting and cliché. I did find her unwavering loyalty to supervillain Max Lord (Pedro Pascal) a little unconvincing but was overall satisfied with her character.

While Cheetah’s CGI fight against Diana was hard to watch at times, I thought it was brave of the directors to allow Wiig’s character to fully morph into an actual cheetah; it would have been easy to write it off as too difficult or unrealistic. I enjoyed that moment for what it was — a scene based on comic book characters that was not meant to be realistic.

Pedro Pascal as Max Lord was also brilliant, and he displayed his wide range of acting ability as compared to the more stoic character he portrays in “The Mandalorian.” He is clever and extravagant, and despite being the antagonist, I still half-hoped he would win due to the wholesome connection with his son, Alistair. After all, Max Lord’s end goal was to make his son proud of him and to give him a good life.

In the final moments that we see Max and Alistair, a tear was brought to my eyes as the former villain realized that his son was more dear to him than any amount of success that the Dreamstone could grant him. If nothing else is taken from this movie, I hope that sentiment sticks with those that watch it.

Several plot holes and mechanics did not align, unfortunately, which both distracted and confused from the main storyline. For example, as Steve and Diana steal a jet from DC, she is suddenly able to make the plane invisible with a secret power that had never been introduced prior — nor is it mentioned or used again.

Later, she is also shown as being able to fly on her own, which is another skill she did not demonstrate earlier, but she does not seem surprised at her ability to do so.

In the final act, our heroine battles Max Lord and calls out to the world to renounce their wishes to return the world to normal. Yet, it becomes confusing as to how exactly this magical system works. Why are they able to take back their wishes? What if not everyone reversed their wish? Are the people who died as a result of someone else’s wish able to take theirs back? I was left wanting further clarity.

Ultimately, I found this film to be an enjoyable ride that is most certainly rewatchable. If you can ignore a few of the glaring mistakes, it is truly a comic book movie that can inspire. While it did not feel as impactful as its 2017 predecessor, I was still pleased with how I spent my Thursday evening and am excited for any additional Wonder Woman that DC and director Patty Jenkins will allow us.

“Wonder Woman 1984” is available to watch in select cinemas and on the streaming platform HBO Max.