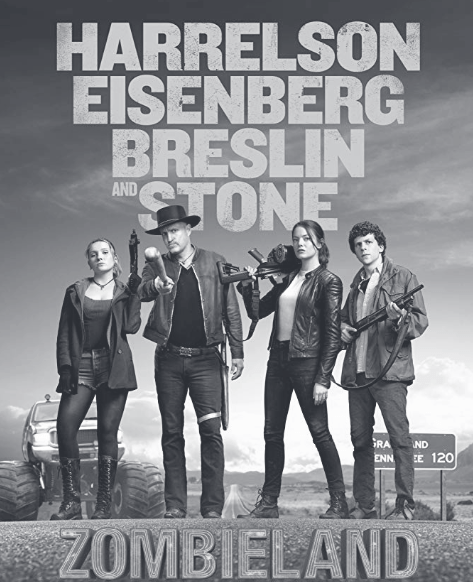 “Zombieland: Double Tap,” like its predecessor, is a film about great cars, big guns and scary zombies. I am not interested in any of those things, but I loved it.

The original “Zombieland” was released a decade ago. Back then, I did not understand the appeal of zombie flicks. I barely understood why people enjoyed horror. “Zombieland” changed that. It was full of gore and grit and people barely surviving—but it was also hilarious and heart-warming. I fell in love with the characters and the terrible world they inhabited.

“Zombieland: Double Tap” expands the world-building and the cast. The original quartet encounter multiple types of zombies on their journey to find a place to call home.

This looks different for everyone. Little Rock (Abigail Breslin) is now 22 and more than ready to leave her “family” and find her peers. Tallahassee (Woody Harrelson), as Little Rock’s father figure, is not nearly ready to let go. Columbus (Jesse Eisenberg) wants to settle down somewhere permanently, while Wichita (Emma Stone) still has a tendency to take off at signs of emotional commitment.

I cannot say the sequel is just as good as the original, but it comes far closer than most. Even better, “Double Tap” works well as a stand-alone movie. There is precisely one moment where knowledge of the first film makes the scene funnier, but even then, it is still possible to enjoy the humor.

Of course, for fans of the original “Zombieland,” there are tons of callbacks. Everything from Room 406 to Mountain Dew Code Red is referenced so neatly that it never seems shoved in, but it feels organic.

Of course, there is some Fridge Logic (that moment at 2 a.m. when you stand in front of the fridge and think, “Wait, that doesn’t make any sense. What a huge plot hole!”). But then, this is a horror-comedy film about zombies and the people who kill them. The audience is not expected to think about the movie, but simply enjoy it for what it is.

The one false note in this symphony of a film is the character of Madison (Zoey Deutch). The perpetually pink-clad woman has survived for the past ten years, in a nutshell, by being too stupid to do anything else. Madison does not even recognize sarcasm, the second-most-frequent language in America. She is obviously introduced to create friction within the main cast, but her too-dumb-to-die persona produced more eyerolls than chuckles.

The awfulness of Madison, however, is entirely cancelled out by the awesomeness of Nevada (Rosario Dawson), a woman who knows what she wants and is not afraid to pursue it. Nevada is self-assured, competent and unapologetic about her eccentric passions—everything I aspire to, regardless of impending zombie apocalypse.

“Double Tap” was chock full of laughs, kooky characters and epic kills. What more could you want?