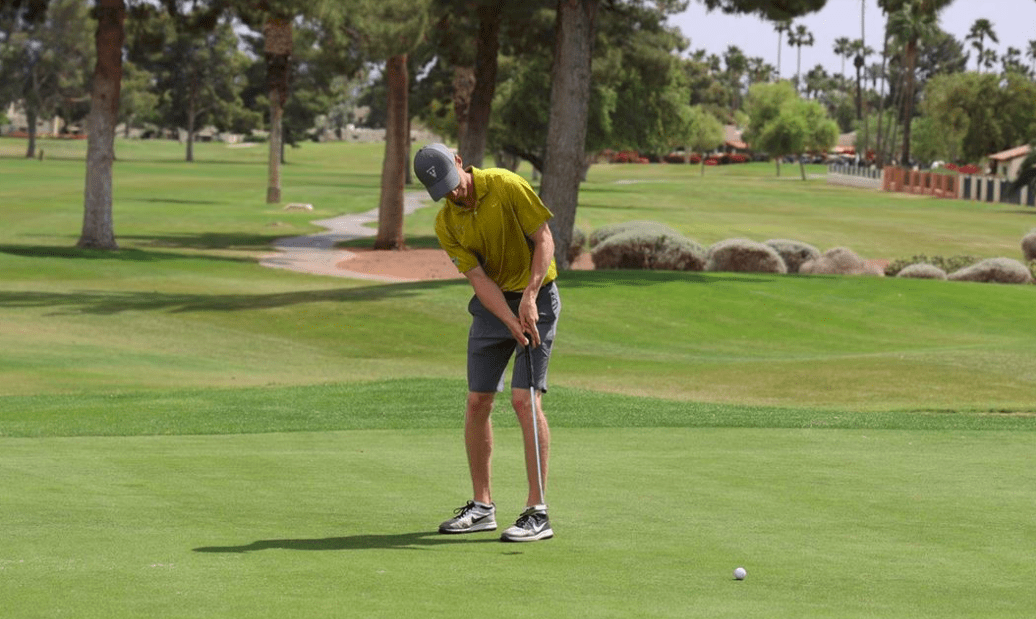 By: Brianna Beassie
In: Sports & Recreation

UCCS Men’s and Women’s Golf teams climbed the scoreboards at their respective tournaments on April 5 and 6.

On day one, the UCCS Men’s Golf team found themselves at the Palm Valley Golf Club in Goodyear, Arizona, as one of the 13 teams and 78 golfers competing in the WNMUMI tournament.

There were two rounds of competition for day one in which the UCCS Men’s Golf team earned 290 points during the first round and 299 points during the second, ending the afternoon with a total of 589 shots made by the team.

Travis Bossio led the UCCS Men’s Golf team with a total of just 145 points and a tie for 23rd place overall. Brandon Bervig tied for 28th place among the individual players with a score of 146. Brady Haake had a total of 149 points, landing himself in 41st place. Tied for 48th place in the tournament, Lucas Howell and Isaac Spillum each had a total of 151 points by the end of day one.

The three competitors with the best scores during Day one of the WNMUMI tournament were all from Grand Canyon University (GCU), led by Matthew Braley, who ended the day with nine-under par 135.

Day two of the WNMUMI tournament led to significant shifts in scores and placement among the thirteen attending teams.

Bossio ended the afternoon with 70 points and earned himself 11th place standing overall. Haake tied with Bossio for the best score of the day at 70 but tied for 23rd place in the tournament. Bervig finished the round with 73 points and found himself tied for 23rd place overall. Once again, Isaac Spillum and Lucas Howell tied one another, both landing in 38th place after each received a score of 72 for the third round.

UCCS Men’s Golf finished in fifth place after accumulating a total score of 873 over the three rounds of the tournament. Colorado State University Pueblo (CSUP) earned the first-place title for the second day of the tournament, with the CSUP ThunderWolves finishing with a score of just 853.

While the UCCS Men’s Golf competed in their tournaments, the UCCS Women’s Golf team competed at the West Texas A&M Desert Invite, located at The Lodge at Ventana Canyon in Tuscon, Arizona.

Out of the 17 teams in attendance at the tournament, the UCCS Women’s Golf team earned the sixth-place title by the end of the first day of competition.

Regina Dillon led the UCCS Women’s Golf team scoring 77 points during the opening round of the tournament, tying for 16th place overall in the individual category. Emily Shimkus scored 78 points and placed 23rd. Dakotah Kreil scored 79 and earned herself a spot in 28th place. Julia Eaton made it to 36th place by scoring 81 in the first round. Samantha Saile ended the afternoon in 85th place overall after scoring 93 points.

By the end of the first day, the Texas A&M Commerce (TAMC) was leading the teams with a score of only 295. Individually, Sarah Wongsinth and Michelle Becker of the TAMC had tied for first place with a score of one-under par 71.

The second day of the tournament ended with the UCCS Women’s Golf Team finishing with a score of 644 from 329 shots and placing ninth overall among the other teams.

Regarding individual placement among the competitors, Kreil led the UCCS Women’s Golf team with 76 points and 13th place in the tournament. Shimkus received a total of 82 points and a tie for 26th place.

Dillon tied for 30th place with 84 points, and Eaton received 89 points and ended the tournament tied for 62nd place overall. Saile had a total of 87 points and earned a spot in 85th place by the end of the day.

The TAMC maintained the first day’s lead and won the tournament against the 16 other teams in attendance, having made only 603 shots over the course of the 2-day competition. Wongsinth of TAMU also held onto her lead in the individual category, placing first among the other 89 players with a shot number of just 147.

All statistics were found on The Mountain Lions Webpages.