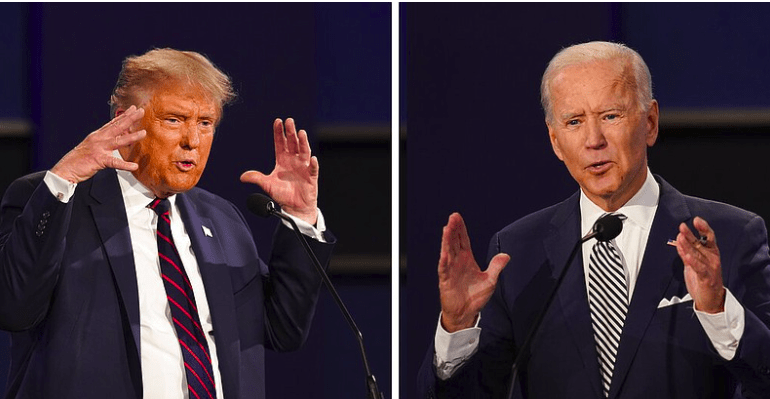 Presidential debates are not constitutionally mandated but are now considered an important part of the election process. They have typically been targeted toward undecided voters who are impartial to any political ideology or party.

At UCCS, this meaning seems to be a little lost, especially in the 2020 election season.

Wyatt Maples, a senior philosophy major, recognizes many circumstances that made watching the debates difficult. “I did not watch any of the debates live,” Maples said. “I’ve avoided watching any political coverage or analysis of the debates due to the polarizations set forth by any current popularized media source.”

Nathaniel Fair, a freshman international business major, echoes this sentiment. “I was disappointed to see some of the news focus on sound bites and not the candidates’ platforms.”

Maples adds that completely avoiding political news coverage is impossible but tries to keep an open mind about the candidates and the statements they have made. “People are still trying to assign some winner or loser to the debate.”

U.S. presidential elections rely on these debates to try and further educate undecided voters. Maples believes that in this election season, this was simply not achieved.

“Questions are directed at the candidates to give them the option to discuss policy change and vision, and this would be the route by which they can most easily state their goals,” Maples said. “Neither candidate was readily interested in discussing themselves or their goals, and on the off chance they did, both were talking over each other.”

Fair agrees that while presidential debates are important to the election process, currently, their significance seems to be lost. “I think the existence of presidential debates is very important, but the current system makes them less useful,” Fair said. “I learned nothing new about the candidates’ viewpoints during the debates.”

Even though a moderator was present at both debates, both candidates had to be reminded multiple times to let the other speak.

“If you refuse to show composure during a political debate, to what degree can you hold your composure in a variety of much more intense presidential situations?” Maples asked.

As an undecided voter, Maples states that neither debate swayed their opinion in either direction.

“I will not be voting for either Donald Trump or Joe Biden. Neither candidate presented themselves as being worthy of the respect placed on them. It was a complete embarrassment to themselves and each other.”

Fair defines themself as a decided voter but says that “the debates made me more apathetic toward the election.

“I heard the same lines as I have since the race started, and the same lies from both candidates.”

“This is a time for us to come together, not push further apart and continually limit the ability of the people of this country to come together and dismiss these institutions,” Maples said.

Sharing a final sentiment, Fair said, “People should pay attention to state and local elections as well. I have worked in state politics and have seen state officials do tremendous good.”

Election Day is today, Nov. 3. Ballots and voting need to be completed by 7 p.m.