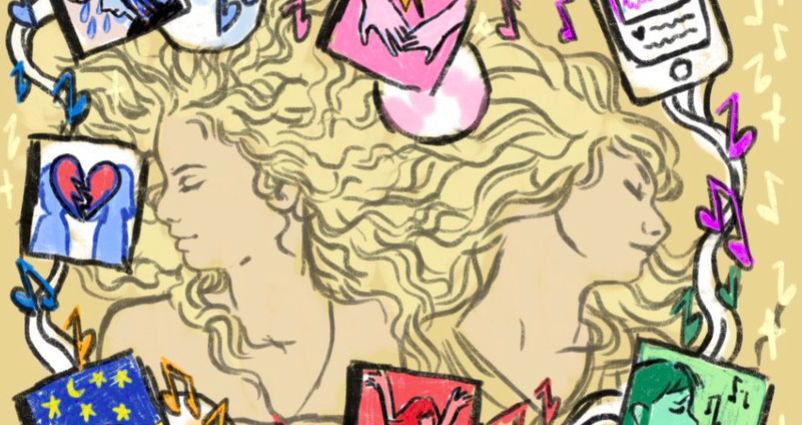 By: Cambrea Schrank
In: Features, Music

I was 8 years old when Taylor Swift released her second studio album, “Fearless.” I had no experience with romantic love or heartbreak, yet, and was belting along to “You Belong with Me,” likely with a juice box and pizza roll in hand. Still, I felt it in my core when she sang “Dreaming about the day when you wake up and find / That what you’re looking for has been here the whole time.”

“Love Story,” “White Horse” and “Fifteen” are some other iconic songs featured on “Fearless.” Way back in 2008, the album was released by Big Machine Records, an independent record label that would eventually screw Swift over big time.

Over a decade later, on April 9, 2021, Swift re-released the original 13 tracks with an additional 13 songs “from the vault.”

Verse by verse, I fell in love with Swift all over again. I stayed up and listened to the whole album, and I felt all the feelings again — but this time with the real emotional connection and a glass of wine.

Everything Swift touches turns to gold — of this I’m convinced. She somehow managed to write two albums (“Folklore” and “Evermore”), back-to-back, and then dropped this masterpiece on us, all in less than a year.

This is how it happened: Swift got mad when she no longer had the rights to her first six albums. Then she got busy. Starting with “Fearless (Taylor’s Version),” she reimagined her past and took control of her music and image again. And I am here for it.

Ask me to pick a favorite song off “Fearless (Taylor’s Version),” and you won’t get a clear answer. The truth: I love them all and have a special connection to each one. However, there are a few notable mentions.

“You All Over Me” and “Mr. Perfectly Fine” are two once-unreleased songs that I have been playing on repeat. “You All Over Me” describes the feeling of still being connected to a former lover. “Mr. Perfectly Fine” is about getting over a player-type boy who appears perfectly fine after breaking a girl’s heart. Knowing that she wrote both when she was only fifteen is impressive, given how emotionally and lyrically mature they are.

Likewise, Swift is 31 years old now, and she has grown a lot emotionally and mentally since she wrote “White Horse.” Swift noticeably changed a lyric in “White Horse” from “this ain’t a fairytale” to “this ain’t our fairytale” at the end. I believe this represents how, over the years, Swift has learned that the end of one love story does not mean the end of all love stories. The old version sounds more bitter; the new gives the song a more uplifting ending. She’s so intentional with each lyric, and each word is complimented by intentional choices in her voice and tone.

Of course, “Love Story” is a forever bop, but this time around Swift sounds noticeably older. In “You Belong With Me,” her voice is deeper, clearer and more consistent in tone and pitch. She sounds powerful. But with this power, comes her sweet old country roots.

Right away, I noticed Swift’s country twang, but especially in “Fearless.” She definitely put her cowboy hat and boots back on for that one. Wider vocal range and all, you cannot deny the twang on the r’s. Thank you, Miss Swift, for bringing the yeehaw out in me.

“So, come feel this magic I’ve been feeling since I met you / Can’t help it if there’s no one else / I can’t help myself” are lines from “Hey Stephen” that really resonated with me. It perfectly captures falling in love with someone and not being able to control your attraction. I know I felt that way about my boyfriend-now-husband, and still do.

What I appreciate most about “Fearless (Taylor’s Version)” is how she took these horrible (and happy) things she experienced at such a young age and re-recorded them in the face of her adversaries. It is brave and empowering and shows that anything can be turned to gold if you’re bold enough to make it happen.

In a way, I grew up with Taylor. She wrote songs for almost every stage of my life. Her music is a gift that just keeps giving.

“Fearless (Taylor’s Version)” is both a comfort and a command. She’s saying, “Don’t let people treat you like shit and get away with it. Do something.” And did she do something.

Taylor, thank you for creating something that continues to inspire and make me cry even now when I’m at a completely different place in my life. Now, I have wine, bills to pay, and I’m married, but the raw emotions are still there. It’s a timeless, transcendental experience, and I recommend that everyone go re-live it.

(Note: I know how much Taylor loves sending cryptic messages to her fans so I included a secret message in this article as well. Hint… first letter, first sentence.)